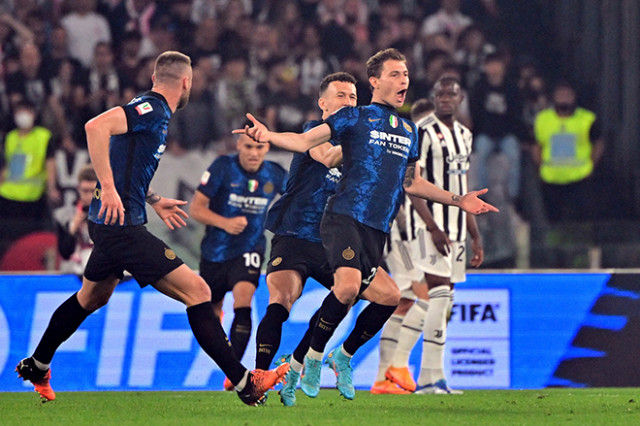 The exciting 2021/22 Serie A season enters its penultimate stage, with Matchday 37 in the Italian top-flight set to get underway on Sunday. Inter Milan will be one of the teams to take center stage this weekend as the defending champions prepare to visit Cagliari in a tie that could have huge ramifications on the title race.

Inzaghi's men enter this round in danger of officially losing the league crown. This is due to the standings as Lautaro Martinez and Co. are second in the table, trailing bitter rivals AC Milan by two points. This means should the Nerazzurri slip up, be it a draw or defeat, and the Rossoneri beat Atalanta earlier today, then the Scudetto will officially go to Il Diavolo.

Fortunately for Inter, they head into this showdown on a high, having won the Coppa Italia in their most recent outing. The Milan giants faced Juventus on Wednesday in the ultimate showdown, beating the Old Lady 4-2 after extra time to get their hands on the title.

Nicolo Barella opened the scoring in that game, netting an absolute screamer to give the Serie A holders a 1-0 lead. However, in the second half, in the span of two minutes, Alegri's side not only equalized, but also took the lead thanks to quick-fire goals from Sandro and Vlahovic.

However, an 80th-minute penalty saw Inter go level before netting an additional two goals in extra time to win the fixture. Nonetheless, fate is out of their hands in the Italian top-flight thanks to that 2-1 defeat away to Bologna late last month. Victory over Cagliari will take the title race into the final day and that will thus be the mission on Sunday.

The home side are currently in the midst of a relegation battle and will thus need a miraculous performance in order to beat the Serie A giants. In fact, the hosts are in 18th and are thus destined to drop as things stand. However, 17th-placed Salernitana are only two points ahead, meaning the race to survive is not yet over.

One simply needs to look at their form to understand why Alessandro Agostini's men are unlikely to win. Teams typically enjoy success at their own stadium, but Cagliari have won only three home games all season.

Their final game of the campaign will be against Venezia, who have already been relegated, but it will be a tough test to secure another season in the Italian top-flight for Cagliari. Nonetheless, it's one they must face.

Inter Milan: Alessandro Bastoni is back and available for selection, but whether the defender will return straight to the lineup remains uncertain. Joaquin Correa and Alexis Sanchez will also be hoping for minutes after the Nerazzurri played a grueling 120 minutes in the Coppa Italia final.

Cagliari: The home side do not have several concerns, with Nahitan Nandez being sidelined. Additionally, reserve keeper Boris Radunovic is suspended for the hosts.