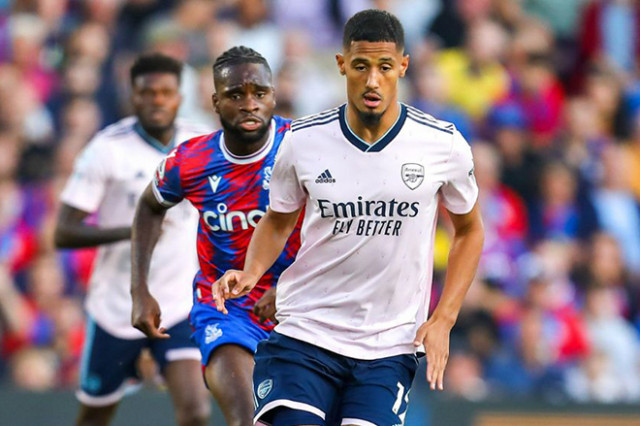 Arsenal kicked off the new 2022/23 Premier League season on Friday, with the Gunners visiting Crystal Palace in what was an interesting opening showdown.

After losing 3-0 at Selhurst Park last term, a result which was one of many that derailed their top-four push, Mikel Arteta's went on the hunt for revenge, with his men coming out swinging early on. For the first half an hour of the game, Vieira's side were unable to withstand the north London giants as Gabriel Martinelli gave the visitors a 1-0 lead in the 20th minute.

However, the Eagles eventually found their rhythm and in the second half, the home side put Arsenal under pressure and pegged them back. Nonetheless, Arteta's men weathered the storm and maintained a clean sheet as Bukayo Saka helped double the visitors lead late in the game, as a cross from the Englishman was converted by Marc Guehi into the back of his own net.

The team picked up plaudits for starting the new season with a win, something they failed to do in 2021/22, losing 2-0 away to Brentford last term. While the Gunners as a whole were admirable, one man in particular stood out and that was debutant William Saliba.

Despite signing for the Premier League giants back in 2019, the highly-rated Frenchman had never played a competitive game for the UEFA Europa League side up until now, having endured several loan spells. However, his performance proved one thing: the 21-year-old was worth the wait!

So assured and confident the young center-back was, with Sky Sports pundits Jamie Carragher and Gary Neville lavishing him with praise. In fact, the Manchester United legend even went as far as claiming Saliba reminded him of a young Rio Ferdinand, and given what the English defender went on to achieve in his career, this is one of the best compliments William can get.

"I was massively impressed by him," Neville said, as per talkSPORT. "He reminded me of a young Rio Ferdinand."

Saliba was named Man of the Match after the game, and rightfully so, and spoke with great glee after finally getting his Arsenal debut. However, the season is long and there is a lot more to do as Arteta and Co. prepare for clashes with Leicester, Bournemouth, Fulham, and Aston Villa before a tricky trip to bitter rivals Manchester United in early September.