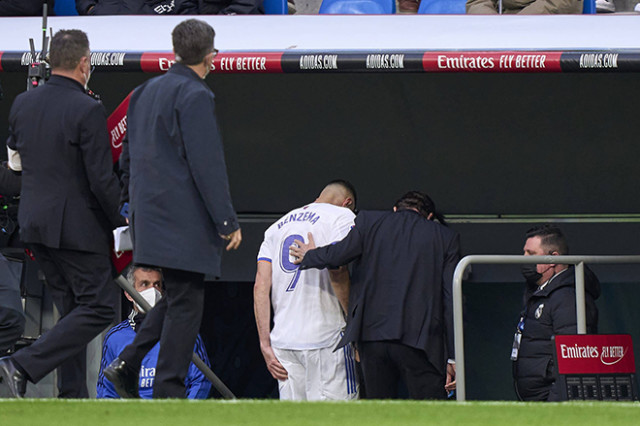 Not only did the weekend see Real Madrid drop points in the Spanish top-flight race, but the Primera Division leaders also lost their most influential player to an injury.

That man is none other than Karim Benzema, their top scorer, who was forced off the pitch in Sunday's 2-2 draw with Elche. The Frenchman, who missed a penalty in the first half of that stalemate, came off just before the hour mark after picking up a hamstring issue.

The UEFA Nations League winner was seen clutching the back of his leg in discomfort before leaving the pitch, leaving many concerned over his fitness. With 24 goals in 28 appearances across all competitions for Los Blancos, it's hard not to see where the concerns are coming from, with the 34-year-old being Ancelotti's key man.

According to Marca, Benzema is hopeful about the situation as he prepares to undergo an MRI to determine the extent of his injury. However, the club have concerns given the amount of games he has played so far this season.

We are only halfway through the campaign and the former Lyon man has already taken to the pitch a whopping 35 times, 28 of which came in a Los Merengues jersey – seven was for the French national team.

Real Madrid won't be back in action until February 3 when they face Athletic Club in the Copa del Rey quarterfinals. While the Spanish giants would prefer to have him back in time for that tie, all eyes will be on the February 15 trip to the Parc des Princes for the first leg of their UEFA Champions League round of 16 showdown with PSG.

There's little to suggest he won't be fit for that tie, but further scans will shed more light on Benzema's fitness. Until then, expect Real Madrid to wrap their star player in cotton wool.