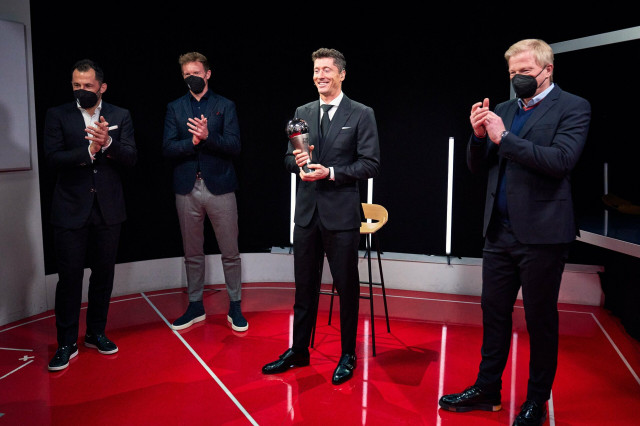 The Best FIFA Awards 2021: Full list of all award recipients as Lewandowski beats Messi to win the ultimate gong

The Best FIFA Awards ceremony held on Monday saw Robert Lewandowski beat Lionel Messi to win the Men's Player of the Year award for a record second successive time. The 33-year-old Polish striker and the Argentine were joined on the virtual podium by Liverpool and Egyptian striker Mohamed Salah as the three best players of the year 2021.

Back in November, Lionel Messi was met with massive backlash by many prominent voices in football after winning a record-seventh Ballon d'Or. Some insisted that the accolade should have been handed over to Robert Lewandowski for having yet another memorable year after he missed out on winning in 2020 following France Football's cancellation of the event.

On Monday, the Bayern Munich striker who finished 2021 with 51 goals from 57 appearances, a Bundesliga title and a DFL Supercup, finally got one over his Argentine nemesis. The player who was unable to travel to the ceremony in Zurich received his award in the presence of the legendary Gerd Muller whose record he broke before the end of last year.

In the women's category, Barcelona's Alexia Putellas added to her Ballon d'Or win in November by beating compatriot Jennifer Hermoso and Sam Kerr to The Best FIFA Women's Player of the Year award. It was yet another big win for Chelsea as Emma Hayes and Thomas Tuchel were named as the Best FIFA Women's and Men's Coach of the Year respectively.

The Best Women's Goalkeeper Award went to Christiane Endler of Chile while Senegal and Chelsea's Edouardo Mendy picked up the trophy for the Best Men's Goalkeeper. The latter, however, did not make the cut for the FIFA FIFPro World 11.

By the players, for the players. @FIFAWorldCup pic.twitter.com/zNAZiTp4S2

The FIFA Fair Play Award went to the Danish team and medical staff for the role they played in saving the life of Christian Eriksen after his plight in the Denmark-Finland match at Euro 2020. Earlier, Eric Lamela won the Puskas Award for his phenomenal 'rabona' goal for Tottenham in last season's North London derby.

Canadian international Christine Sinclair was given award in recognition for her scoring a record 185 goals for her country while Cristiano Ronaldo also received The Best FIFA Special Award.