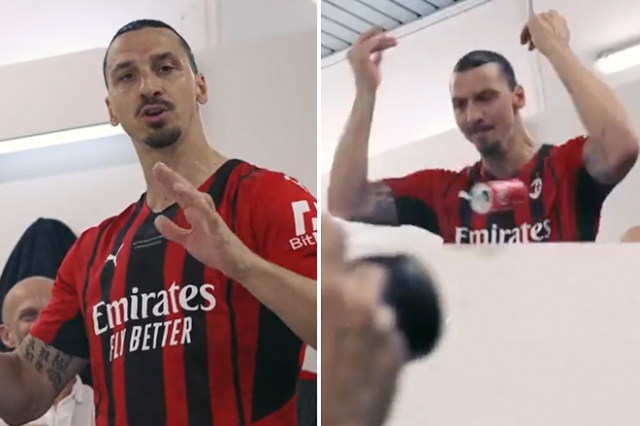 After 11 long years, AC Milan finally got their hands on the Scudetto!

The Rossoneri took to the field on Sunday for the final game of the 2021/22 season knowing that a win would secure them the title. Pioli's men entered this round top of the table and were thus met with the opportunity of securing the Serie A crown away to Sassuolo.

And that's just what they did! A brace from Olivier Giroud and a goal from Franck Kessie in his final game for the club helped them to a 3-0 win, thus sealing their first top-flight success since 2010/11.

As a result, the AC Milan dressing room was in exuberant mood after the final whistle. Videos from their celebrations have emerged, with one in particular going viral as it involved none other than Zlatan Ibrahimovic.

The iconic Sweden, who was at the San Siro the last time they won the Serie A title, gave a spine-tingling speech in the dressing room to his team-mates, the manager, and staff. The striker thanked all the players for their contribution this season, told everyone to celebrate like a champion, and ended his speech with a sentence that sent everyone ecstatic.

"Now, do me a favor: celebrate like champions because it isn't Milan that belongs to AC Milan, Italy belongs to AC Milan!" Ibrahimovic screamed before flipping the table in front of him. Watch this brilliant moment in the clip below.

Zlatan also showed his class during the title celebrations as the striker made sure to show appreciation towards Maldini and Gazidis, two behind-the-scenes figures at AC Milan. Additionally, the 40-year-old dedicated his latest Scudetto to the late Mino Raiola, his well-known agent who sadly passed away less than a month ago.

"I dedicate this to Mino Raiola, its my first trophy without him.

He told me that only I could save this Milan."

Furthermore, the former Barcelona, PSG, and Manchester United goalscorer admitted that he has not yet made a decision regarding his future. However, Zlatan confessed that he has not been in the best physical shape recently.