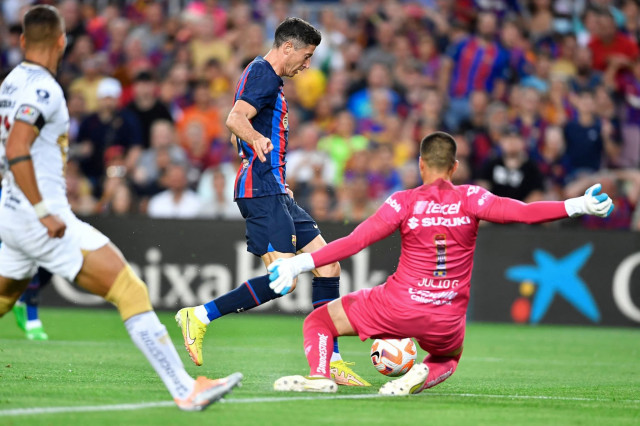 Robert Lewandowski has finally ended his goalscoring drought by inspiring Barcelona to a big win in Sunday night's Joan Gamper Trophy clash with Pumas UNAM at Camp Nou. The Polish striker was on target once and managed two assists as the Catalans secured an emphatic 6-0 win against their Mexican opponents.

It was complete dominance on the part of Barca who were wrapping up their pre-season preparations ahead.of the commencement of La Liga next weekend. Robert Lewandowski needed a little over 160 seconds to reintroduce himself to the Camp Nou faithful with a brilliant opening goal. Three minutes later, the former Bayern Munich talisman assisted Pedri for the second goal of the night before giving the young Spaniard another pass in the 19th minute to put home for his brace.

In between Pedri's two goals, Ousmane Dembele and Raphinha combined once more to produce another goal with their newly-formed partnership growing from strength to strength. The script did not change in the second half as Franck Kessie will assist Pierre-Emerick Aubameyang for Barcelona's fifth goal of the night just three minutes after they were both substituted on. Frenkie De Jong rehashed his importance to Xavi's plan by remarkable running the show in midfield and was eventually rewarded with a goal with six minutes of normal time left to play.

In the end, Lewandowski was adjudged as the Player of the Match as Barcelona secured the Joan Gamper Trophy for the 10th-time in a row. Watch Lewandowski's first goal at Camp Nou below: