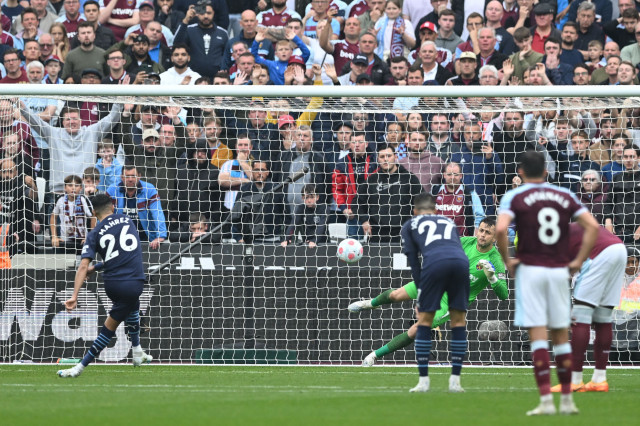 Riyad Mahrez missed a crucial penalty on Sunday afternoon to deny Manchester City a sensational comeback win over West Ham at the London Stadium. The 28-year-old attacker failed to secure the maximum three points for the league leaders, putting them in a tricky situation in their title charge which will now be decided on the final day.

City's nervy afternoon began with Jarrod Bowen opening the scoring inside the 24th minute. The Englishman received the ball from Pablo Fornals and rounded Ederson before putting it into the net from a tight angle. On the stroke of half-time, the 25-year-old winger doubled the Hammers' advantage by firing home a low effort from the edge of the box.

Pep Guardiola's men fashioned the best response following the half-time break, with Jack Grealish pulling one back in the49th minute after his shot deflected off Craig Dawson leg before bouncing over Lukasz Fabianski into the West Ham net. Michail Antonio subsequently had a couple glorious goalscoring opportunities to put the game out of City's reach but failed to do so on both instances. In return, his side was punished as they would end up conceeding a Vladmir Coufal own-goal in the 69th minute.

Gabriel Jesus gave Man City a golden opportunity to seal their Premier League fate by earning a penaly for the defending champions after being brought down in the West Ham penalty area. However, Riyad Mahrez failed to convert the chance, with Lukasz Fabianski guessing the right way to save his attempt.

Most @premierleague penalty saves since 2015-16

Most @premierleague penalty misses since 2015-16

With Liverpool yet to play their penultimate league game against Southampton on Tuesday, the Citizens sit atop the table with a four-point lead. Guardiola's men are now required to defeat Steven Gerrard's Aston Villa in their final game of the season. On the contrary, any other result but a win would favor Liverpool, with the Reds expected to secure successive wins over the Saints and Wolves.

Fabianski comes up BIG with this penalty save late in the match!