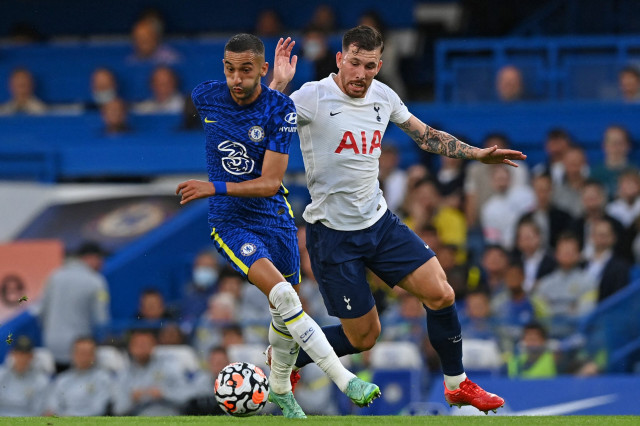 With the turn of the year ushering in the second round of the 2021/2022 Premier League season, it is looking increasingly likely that Manchester City will be far gone when their title rivals awake from their slumber. Ahead of the games scheduled for this weekend, the Citizens have broken away from the pack and are now enjoying solitude atop the league title with the image of a back-to-back league title win increasingly becoming vivid.

Until an extraordinary turn of events ensue for the Etihad outfit to lose their grip on tthe title, attention will remain on the competition for European places which is currently hotting up. The outcome of this weeekend's fixtures could present a new outlook to affairs and we are on-hand to offer the needed information to catch all the games live.

Premier League standings ahead of Matchday 24

A sneak peak at how the table looks ahead of the upcoming round of games.

Premier League games to look forward to ahead of Matchday 24

Everton vs Aston Villa: Everton will begin life after Rafael Benitezby hosting Aston Villa at Goodison Park for a Premier League clash on Saturday lunchtime. Last Saturday, the Toffees were humiliated 2-1 by Norwich City, a result which broke the camel's back and facilitated the sack of the Spanish coach. With just six points separating the Merseysiders and the relegation zone, they will be eager to turn things around as soon as possible. On the contrary, the Vilans will look to complicate things for them as they look to build on a big result from last week. Steven Gerrard's impressive start as the club's new manager contnued after firing his side to come from two goals down and salvage a point in a 2-2 draw with Manchester United.

Manchester United vs West Ham: Manchester United will play West Ham United in the Premier League on Saturday to round off the month of January.  Under David Moyes, the Hammers have had another successful season and are now in fourth place.  United, on the other hand, is just one of several chasing teams, and could well accomplish a league double over the Hammers this weekend. Should they win, the Red Devils will overtake West Ham in the table and momentarily occupy fourth position. They go into the encounter on the back of a brilliant 3-1 win at Brentford in midweek, a result which saw them become the first club to manage 300 away wins in the Premier League's history. On the contrary, West Ham were handed a disappointing 3-2 defeat in their last outing against Leeds United..

Southampton vs Manchester City: Premier League leaders Manchester City takes on Southampton at St Mary's on Saturday evening and will be striving to secure their 13th consecutive league victory. While Pep Guardiola says that the title race is far from over, the Citizens are certain that their team will win their fourth Premier League title in five years following their 1-0 victory over title rivals Chelsea last weekend. Meanwhile, the Saints, who drew a goalless draw at the Etihad Stadium earlier this season, may move into the top ten if they win all three points at home.

Chelsea vs Tottenham Hotspur: On Sunday afternoon, Chelsea will host London rivals Tottenham Hotspur at Stamford Bridge in one of the Premier League's most exciting matches. The Blues are now third in the rankings, eight points ahead of fifth-placed Tottenham Hotspur, although Antonio Conte's side has four games in hand  due to a number of recent fixtures being postponed.

Crystal Palace vs Liverpool: Liverpool return to Premier League action against Crystal Palace after securing their place in the EFL Cup final. The Reds will hope to make a difference and potentially consolidate theur status as contenders for next season's Champions League after seeing the Premier League title slip further away from them. Meanwhile, Palace are back in action after a thrilling 1-1 draw with Brighton & Hove Albion in the M23 derby nine days ago.