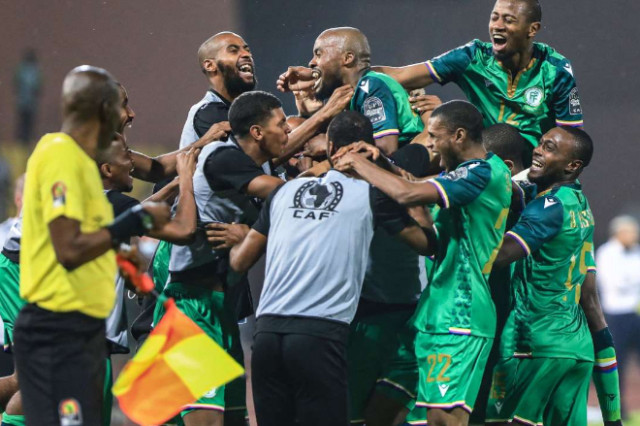 Debutants at this year's Africa Cup of Nations, Comoros are experiencing difficulty putting together a team for their last-16 match against host nation Cameroon, according to their federation. In a revelation made on Saturday, 12 players - including two goalkeepers - and management members had tested positive for Covid-19.

The Coelacanths made history by booking a Round of 16 ticket after managing a surprise win over Ghana in their final group stage. The team had lost to both Morocco and Gabon in their first two games but successfully sent the Black Stars packing with a 3-2 win in the final group game of the campaign. Having qualified as one of the third-best placed teams as a result, Comoros now face a herculean task to put together a team worthy of taking on host nation Cameroon in their historic last 16 appearance.

In a video posted on the official Twitter account of the team, general manager El Hadad Hamidi stated that first and second choice goalkeepers, Moyadh Ousseini and Ali Ahamada, are unavailable for the clash. Five outfield players namely Nakibou Aboubakari, Yacine Bourhane, Mohamed M'Changama, Kassim Abdallah and Alexis Souahy, were also named among those who have tested positive.

Per the Confederation of African Football's guidelines for the tournament, teams are advised to play games as long as at least 11 players test negative for the coronavirus. In the same vein, all the participating countries were asked to select at least four goalkeepers for the finals. However, at the moment, danger is looming for Comoros with their only remaining goalkeeper Salim Ben Boina, also picking up an injury in the win over Ghana.

On Sunday, the Coelacanths revealed that they will face Cameroon on Monday with an outfield player in goal. "We've already chosen an outfield player who will start as keeper," Comoros assistant boss Daniel Padovanni said. "It's a player who in training has shown that he can play as a keeper."