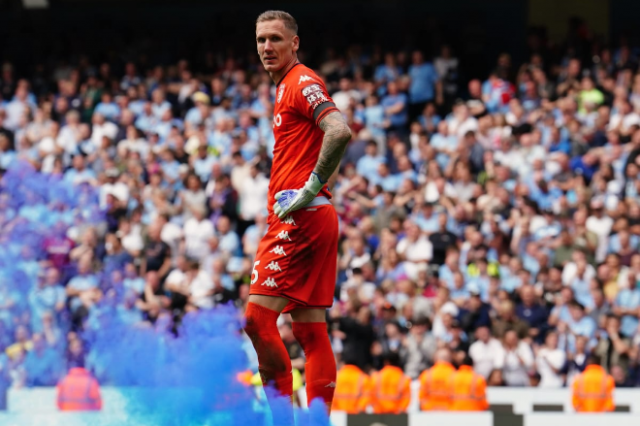 Man City have apologized to Aston Villa goalkeeper Robin Olsen after he was assaulted following the conclusion of Sunday's encounter. The Premier League champions have declared that they are poised to bring the perpetrators to book and have launched an investigation into the matter.

Villa's final game of the season saw Robin Olsen being given the nod in goal to make his debut this season following Emiliano's Martinez's unavailability. The latter had pick a knee injury and was omitted from the squad that completed the trip to Etihad.

In his absence, the Villans almost stunned City, taking a two goal lead with barely 20 minutes of regulation time left. However a double by Ilkay Gundogan and Rodri's strike secure the maximum three points for City and their fourth league title under Pep Guardiola. As anticipated, fans broke loose and flooded the pitch at full-time and it was during that moment that a number of them assaulted Olsen.

A statement released by City reads as follows: "Manchester City would like to sincerely apologise to Aston Villa goalkeeper Robin Olsen, who was assaulted after the final whistle at today's match when fans entered the pitch.

"The Club has launched an immediate investigation and once identified, the individual responsible will be issued with an indefinite stadium ban."

Following a several cases of pitch invasions in recent weeks, this is the latest event to tarnish the game. A few days ago Crystal Palace manager Patrick Viera dominated headlines for his reaction after being subjected to a similar treatment during his side's 2-1 defeat to Everton at Goodison Park.

Robin Olsen was struck in the back of the head. He's fine. Nice from City to issue a statement so quickly. #avfc https://t.co/GpiRI46QPZ