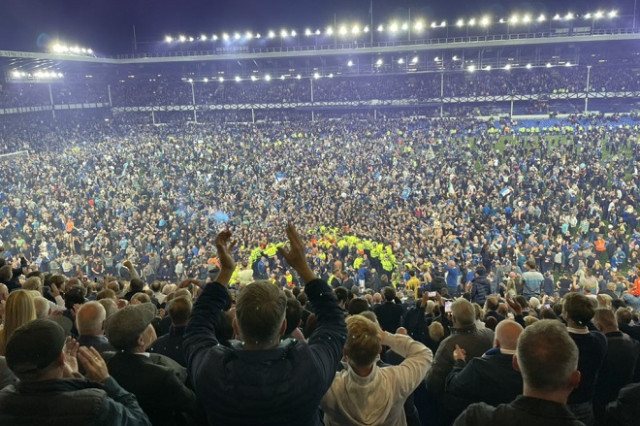 The 2021-22 season was a huge letdown for Everton fans, but in the end, there was cause for celebration as they were able to save themselves from relegation one match before the end of the tournament.

Things did not start properly for Frank Lampard's men, as Crystal Palace took a two-nil lead before the second half. Nevertheless, a furious reaction by Everton saw them score three goals past Jack Butland to say goodbye to the relegation threat.

Michael Kean, Richarlison, and Dominic Calvert-Lewin were in charge of giving Everton fans cause to celebrate with their second half goals, but it was Calver-Lewin's header that caused all hell to break loose at Goodison Park, prompting a massive pitch invasion after his goal and once more following the final whistle.

Calvert-Lewin's goal will surely go down in history as one of the most epic moments in Premier League history, which is why we invite you to have a look here (Image might be geo-restricted).

What a moment for @Everton…. So happy for everyone at the club and the fans! COYB #epl #everton #efc #palace #goal pic.twitter.com/U3aiLssMnY