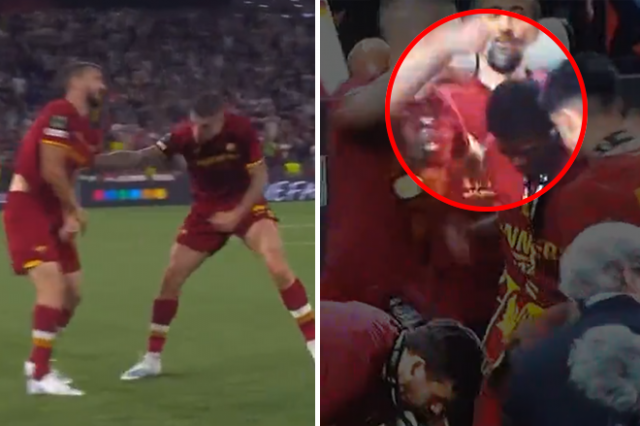 Wednesday saw Roma make history. For the first time ever, the Italian giants got their hands on a European title as Mourinho's side beat Feyenoord in the inaugural final of the UEFA Europa Conference League.

The Serie A and Dutch outfits locked horns at Arena Kombetare in Tirana, with Nicolo Zaniolo scoring the only goal of the game in the first half en route to a 1-0 victory for Tammy Abraham and Co.

Once the final whistle was blown, a sea of emotions erupted from the Roma players, staff, and fans, including Jose Mourinho, who held up five fingers to signify the five major European finals he has now won as a manager.

However, one I Giallorossi player let the emotions get the better of him and that is Gianluca Mancini. From the final whistle up to the title celebrations, the Italian defender appeared to have gotten into an altercation with two teammates, the first being Bryan Cristante.

The pair shared a warm embrace immediately after the final whistle, but things quickly changed when Mancini shoved his comrade, throwing a few jabs at his fellow Italian before eventually walking away.

A while later, after collecting their medals, Mancini was involved in another scuffle with a teammate, this time teenage forward Felix Afena-Gyan. The defender, who looked irritated by the 19-year-old, slapped Afena-Gyan across the face before appearing to punch him while the Ghanaian was walking away. Catch this incident in the clip below.

What occurred between the two? Is this a cause for concern for Mourinho ahead of their return to the UEFA Europa League next season? Speaking to the media, Afena-Gyan was quick to downplay what happened, simply stating that the pair jokingly fight all the time.

"It wasn't serious. We joke and fight at the same. That's how he is. It's normal..nothing serious" pic.twitter.com/b1vTe7qKPN

The aforementioned altercations won't dampen the mood at Roma, nonetheless, as the Serie A outfit celebrate their first title since their Coppa Italia success in 2007/08. It will be interesting to see how Mourinho's side capitalize off of this European glory as they aim to return to the UEFA Champions League and the heights of Italian football.