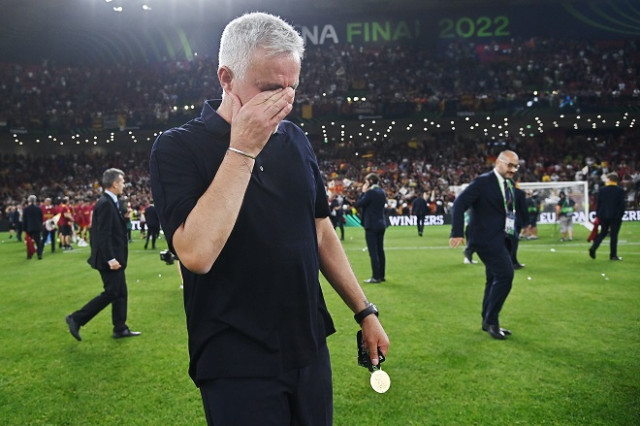 It was a night to remember for both Roma and Jose Mourinho as the Giallorossi won their first European title with the Portuguese coach at the helm. On top of that, Mourinho nabbed a couple of records for himself, but judging by his words, the real success of his project lies on what this crown represents for this club.

Speaking to Sky Sports right after Roma's 1-0 victory, The Special One shared a tearful explanation of what this title will bring to Roma and to his career.

"There are so many thoughts on my mind. These people (the team's supporters) are something else and I understood that when I got here eleven months ago. We had a chance to make history and we took it. I knew we could win this competition after we lost some points in Serie A because of it, and I'm glad we accomplished this because our goal was to go back to the UEFA Europa League," Mourinho said.

The former Chelsea and Manchester United coach went on to discuss how big this trophy is for his personal record, since most of his critics believed he would not be able to lead another club to win a title.

"I found out that only Trapattoni, Ferguson, and myself have won European titles in three different decades. It is lovely, but it makes me feel a bit old. I won them with Porto, Inter, and Roma, and it is special because it is one thing to win when everyone expects you to do so, and it's quite different to win titles when no one pictured it," Mourinho added.

With this new success, interest in Mourinho's services will certainly escalate. But will the coach leave Roma or try to keep up the good work with the Serie A side? His reply certainly leaves no doubts.

"I am staying, there is no doubt about that, even if there are transfer rumors. I want to stay, all you need to do is to understand what our owners want from us for next season. We have a really nice project here and I want to watch it grow," Mourinho concluded.