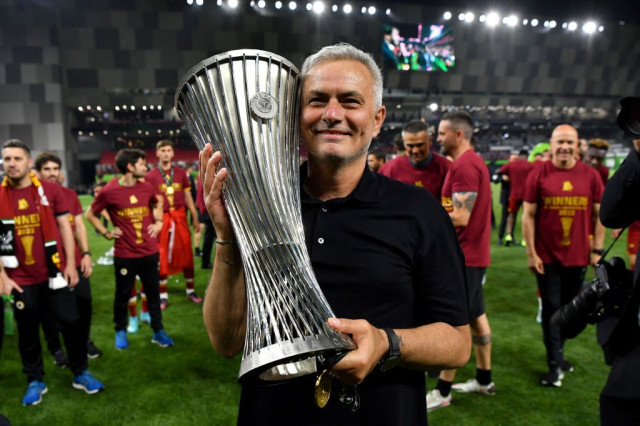 Jose Mourinho has become the first-ever manager to win European trophies with four different clubs after guiding AS Roma to Europa Conference League final win against Feyenoord. The Portuguese manager's side defeated the Eredivise club by a lone goal to nil, ending his first full season at the club with a silverware to his name.

It has been 14 years since Roma last touched a trophy and, in front of over 20,000 fans inside Arena Kombëtare in Albania, the Serie A club did just enough to write their names in the history books. It was far from a stroll in the park for the Italian capital club as Feyenoord mounted a proper contest to justify their final qualification berth. However, Nicolo Zaniolo's 32nd minute strike proved to be the difference maker with no goal coming after the deadlock was broken.

In retrospect the 22-year-old attacker landed a personal milestone of his own, becoming the youngest-ever Italian to score in a final of a major European competition since Alessandro Del Piero (22 years, 200 days). The latter landed the feat by netting against Borussia Dortmund in the Champions League final in May 1997.

Roma have finally done it! They've won a major European trophy for the first time!

It is also worth noting that Mourinho is the second manager to win five major European titles after Giovanni Trapattoni, with the Portuguese now winning the UEFA Europa Conference League, the UEFA Champions League twice and also the UEFA Cup/Europa League twice.

In the grand scheme of things, AS Roma have now won their first UEFA title in their history and their first international competition since the Inter-Cities Fairs Cup in 1960/61 campaign. They are also the first Italian side to win a major European competition since Inter in 2010, also under José Mourinho.