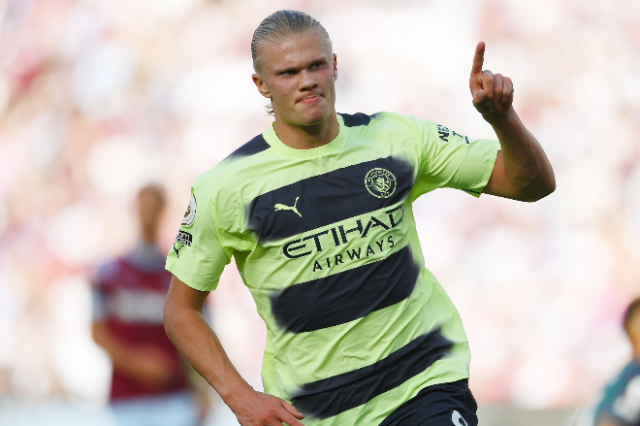 Manchester City striker Erling Haaland entered the club's history books for his remarkable contribution in inspiring the club to a win over West Ham in their first Premier League game of the season. The 22-year-old Norwegian striker scored twice in his debut to match Sergio Aguero's feat as the only player to hit a brace in his league debut for the Citizens.

Following the disappointing showing in the FA Community Shield defeat to Liverpool, Haaland came up good at the London Stadium and it took him 35 minutes to show Premier League fans his goalscoring prowess on Sunday. City's $62M summer signing from Borussia Dortmund opened his account from a penalty that he won himself after being fouled by the Hammers' substitute keeper Alphonse Areola. The latter had replaced Lukasz Fabianski, who was forced off before the half-hour mark after colliding with Haaland and Aaron Cresswell.

Haaland made no mistake from 12 yards to put Man City in the driving seat and kept his tradition of scoring in his debuts intact, having previously done same in the the Bundesliga and the Champions League. His second goal of the night which arrived in the 65th minute was a thing of beauty, breaking away from the West Ham defense and race onto Kevin De Bruyne's exquisite through-ball to bury home Man City second.

2 - Erling Haaland is the second debutant in Premier League history to both win a penalty and then successfully convert it, after Alexandre Pato for Chelsea in April 2016 (v Aston Villa). Treat. pic.twitter.com/R9WDAlzJIi

While it is early days yet, Erling Haaland sits alongside Aleksandr Mitrovic and Pascal Gross as the only three players to have scored a brace for their respective clubs in the first round of Premier League matches.