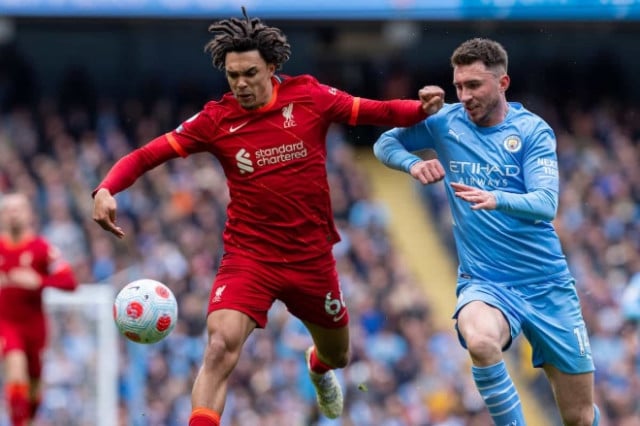 Certainly, the script could not have been written any better. Just one point divides league leaders Manchester City and Liverpool. The two sides have been head and shoulders above the rest by a considerable margin, leaving the likes of Chelsea, Tottenham, and Manchester United all trailing in their wake. After a tense 2021/22 campaign that has seen the two teams go head to head three times, including twice in the Premier League that resulted in two-all draws and during the FA Cup semis, during which Liverpool won 3-2, the league title will be decided on the final matchday.

While Liverpool and Manchester City will not be meeting at this juncture - as that would have been really the stuff of a cheesy Hollywood flick - one can certainly bet that both Jurgen Klopp and Pep Guardiola will have one eye on their respective rivals' results as they take on Wolves and Aston Villa respectively.

Here is everything you need to know ahead of what surely will be a very exciting conclusion to the 2021/22 English Premier League season.

When will Liverpool and Manchester City be in action?

Liverpool and Manchester City will both be in action on Sunday, May 22nd in a day that has been dubbed as "Super Sunday" by broadcasters in the UK, in the USA, and elsewhere. To avoid any kind of shenanigans or unfair advantages, all games will be played at 11:00 EST (16:00 BST).

Who will Liverpool and Manchester City be playing?

Both Liverpool and Manchester City fortunately will be playing their final league games of the 2021/22 campaign on home turf. The Reds will take on Wolves, while City will face Aston Villa.

How do Liverpool and Manchester City compare in the table?

Here is a look at how the Reds and the Cityzens stack up ahead of their fixtures against Wolves and Aston Villa this Sunday:

How did Liverpool get to this juncture?

So far, Liverpool have racked up 89 points. Klopp's men boast a record of 27 wins, eight draws, and two losses from 37 matches. Notably, the Reds have yet to lose a single home league game, with a solid record of 14 wins and four draws from their 18 games at Anfield.

On Sunday, they will be facing Wolves, who presently sit in eighth place. Liverpool did edge out their upcoming opponents 1-0 in the reverse fixture earlier this season, and although Wolves come into this contest having failed to win any of their last six games (two draws, four losses), they still could cause some issues if the hosts are not on top of their game this Sunday.

How did Manchester City get to this juncture?

Meanwhile, Manchester City have earned 90 points, which puts them narrowly on top of the league table. Guardiola's side have won 28, drawn six, and lost three of their 37 games this season. Unlike the Reds, City have not been flawless at home, losing to both Tottenham (who are the only team to beat City both home and away) as well as to Crystal Palace.

This weekend will see them wrap up their Premier League title race with a home match against Aston Villa. Steven Gerrard's side sit in 14th spot, and with 45 points are comfortably safe for next season, but have won just one game since the start of this month.

What do Liverpool need to do to win the 2021/22 English Premier League title?

Simply put, Liverpool can not afford to lose to Wolves this Sunday. A draw will probably not suffice, either, even if City fail to beat Aston Villa as the Cityzens have a better goal differential (+72 vs Liverpool's +66, or an advantage of +6) at the moment.

All in all, a win for Liverpool over Wolves, coupled with a draw or a loss for City against Aston Villa will ensure that Klopp's men celebrate a third title this season.

What do Manchester City need to do to win the 2021/22 English Premier League title?

City's destiny is firmly in their hands at this point. All they need to do is beat Aston Villa this Sunday and they will win the Premier League title.

However, if they fail to do so, a draw might be enough, provided that Liverpool do not beat Wolves. A loss for City could also be OK, if Liverpool also lose their game, but if Liverpool do draw with Wolves, things could get very interesting...

What permutations could come into play if City and Liverpool are tied on points?

For starters, City's goal difference will ensure that they win the Premier League title. As noted before, they do have a goal advantage of +6.

Of course, if Liverpool and Wolves play to a high scoring draw, such as a five-all result, and City somehow lose 6-0 to Aston Villa, things could take a fascinating turn.

If that happens, both teams will be tied on goal difference and goals scored. Then, it will come down to:

So, in short, we could theoretically see Liverpool and City have to face in a winners-take-all match at a neutral venue.

However, that's really unlikely. During the 2018/19 season, City won the league title by just one point, picking up 98 versus Liverpool's 97, and it is very likely that the same outcome will take place this Sunday.

Where can I watch Liverpool and Manchester City in action this weekend?