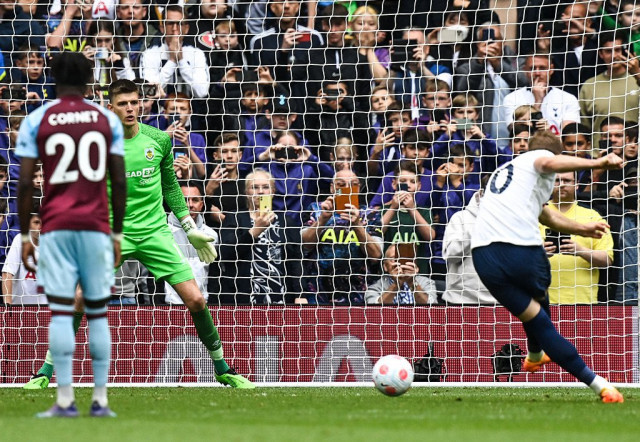 Tottenham Hotspur have usurped rivals Arsenal to occupy fourth position in the Premier League table thanks to Harry Kane's first-half penalty against Burnley on Sunday. Striker Ashley Barnes was adjudged to have handled the ball in his side's penalty area, and the decision to award the spot-kick was made after VAR instructed Kevin Friend to review the incident on the pitch-side monitor.

The clash between Spurs and the Clarets had a huge significance on the top-four race as well as the relegation battle. In the end, it was the visitors who were dealt a harsh reality, conceding a penalty which has since generated a lot of backlash on social media. Ashley Barnes was the culprit as whiles he was under pressure from Davinson Sanchez, attempted to the clear the ball from Burnley's penalty area. However, the striker was slow to react, with the ball making contact his already outstretched arm.

Harry Kane's penalty gives Tottenham the lead just before the half!

As things stand, Tottenham are in 4th place.

Kane's strike from the spot ultimately decided the game and put a dent in Burnley's Premier League survival hopes. Following the encounter, caretaker boss Jackson expressed his disappointment in referee Kevin Friend and VAR. "I've just watched it back - I don't think it's a penalty," Jackson said in his post-match press conference.

"You have to look at what happens before the ball comes in. It's an 18-yard box with bodies in it, people are competing.

"Someone pulls Ash's arm, he tries to keep his balance. How he can get out of the way of that, I don't know. You don't stand in an 18-yard box with your arms by your side. They're up and they're using your strength. Nobody has even appealed for a penalty.

"How can you go back into the 18-yard box and there's three shirt pulls, someone pulls someone's arm - you'd never get the game going.

"I'm annoyed but I'm proud of the group. They gave a right go. There's a sign of fighting spirit. I don't want to take my annoyance out on something when they played so well."

Sunday's verdict by referee Kevin Friend was the second disputed penalty decision  that had gone Tottenham's way this week. Against Arsenal, Antonio Conte's men received a first-half penalty when Cedric Soares was adjudged to have fouled Heung-Min Son. The win over Burnley means that the fate of Gunners is in their own hands as they must win their remaining two games to secure Champions League qualification for next season.

Here are a few reactions by fans after Spurs were awarded the penalty against Burnley:

Spurs whenever they struggle to break down a side pic.twitter.com/VqzJb54L84

Who wants to talk about harsh penalties for handball at Spurs stadium? I'm ready when you are… pic.twitter.com/yOWmJfFfkt

Don't be fooled, the referee didn't go and check for a penalty. He went to check if Spurs had credited his bank account

That could be the difference between CL football or not for Spurs, and relegation for Burnley.

Spurs could win this 3-0 again but that penalty is the defining moment. Again.

It's a disgusting decision.

2 soft penalties in 2 games for Spurs

Spurs gifted yet another soft penalty. The allocated time for the first half was already done and the ref pulls it back to give a handball. How is Barnes possibly supposed to move out of the way? It's launched at him from point blank range.