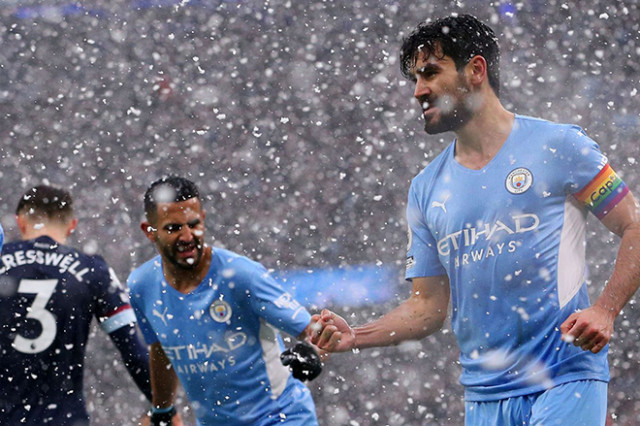 Premier League: Where to watch West Ham vs Man City and all the Matchweek 37 games live

The Premier League season is nearing its end! While a few teams do have games in hand, which will be played during the midweek, only two fixtures remain before the campaign ends for most teams. This means that the penultimate round of the English top-flight will get underway as Manchester City and Tottenham headline the weekend action.

On one hand, we have the title race intensifying, with the Ciityzens looking to move six points clear at the top before Liverpool take to the field on Tuesday as a slip-up from the Reds could see the title head to Manchester. On the other, the race to finish in the top four faces another hurdle as Spurs look to leapfrog bitter rivals Arsenal before the Gunners are called into action on Monday.

And that's not all. Norwich City and Watford have already been relegated, but one more team is yet to be demoted and that spot is up for grabs – albeit unwillingly. It currently looks to be a race between Leeds, who enter this round in the danger zone, Burnley, and Everton. Here's everything you need to know ahead of Matchweek 37 and the rescheduled midweek fixtures.

Premier League table ahead of Matchweek 37

Top games to watch in the Premier League on Matchweek 37

While Liverpool will be in action this round, the Reds will have to wait until after the weekend. As a result, Manchester City have a brilliant opportunity to move six points clear of Klopp's second-placed side this Sunday. Unfortunately, the Cityzens won't have an easy ride as they will have to visit West Ham, one of the toughest teams this season outside the top five. Fortunately, Guardiola's men enter this tie on the back of two consecutive emphatic wins, scoring 10 goals in 5-0 and 5-1 victories over Newcastle and Wolves. This came in the wake of their UEFA Champions League semifinal exit at the hands of Real Madrid, silencing fears of a potential Premier League collapse as well.

However, will De Bruyne and Co. get a victory at the London Stadium or slip up? Having failed to reach the UEFA Europa League final, West Ham can no longer qualify for the UEFA Champions League next season as they are mathematically out of the top four race. However, what David Moyes' men can do is leapfrog fifth-placed Manchester United, which would relegate the Red Devils to the UEFA Europa Conference League. Cristiano and Co. are only three points ahead with one game remaining for them in the season. West Ham, on the other hand, have two matches left and a superior goal difference. This means that victories over Manchester City and Brighton should secure Bowen and Co. Europa League football, which would be a great achievement for the London side.

Thursday's North London Derby showdown with Tottenham could have secured Arsenal a top four finish. Unfortunately, a controversial penalty and the sending off of Rob Holding led to a 3-0 defeat for the Gunners, meaning the race to secure UEFA Champions League football will go down to the wire. Despite suffering a gut-wrenching defeat, Arteta's side must return to winning ways immediately as Spurs are only a point behind with two games left. Unfortunately, they'll be visiting a tough opposition with possibly no center-backs, as Holding is suspended while Ben White and Gabriel are injury concerns, with the latter coming off in the second half of the midweek derby after hurting his hamstring.

As for the Magpies, they are no longer a dreadful team staring at the face of relegation. The appointment of Eddie Howe and the January signings have turned the club's fortunes around. In fact, in 2022, the Magpies have picked up 32 points, with only four other Premier League clubs earning more this calendar year. Additionally, in 2022, only one visiting team has won at St. James' Park and that was Klopp's rampant Liverpool side, and even the Merseyside giants found it extremely difficult there, triumphing by only one goal. With this being their final home game of the season, Newcastle will look to treat their fans to a lovely day, and beating Arsenal would do just the trick.

Fresh off their FA Cup victory, Liverpool will return to action on Tuesday in the Premier League as the title contenders look to maintain their pursuit of the quadruple. This away game comes on the back of their FA Cup final victory over Chelsea as Klopp's men beat Tuchel's crew at Wembley on penalties to get their hands on their second domestic cup trophy of the season, having won the Carabao Cup earlier this year. The Reds were unable to score against the London giants despite creating several opportunities, hence the need for spot kicks, with Tsimikas netting the decisive goal. Nonetheless, the 1-1 draw at home to Tottenham in the Premier League over the weekend means Liverpool need a miracle in order to usurper top-flight leaders Manchester City. With a three-point disadvantage and an inferior goal difference, Salah and Co. will realistically need their rivals to slip up in both of their remaining fixtures. Nonetheless, expect the Merseyside giants to give it their all until the end.

Southampton, on the other hand, have nothing left to play for this season but pride. While the Saints are in 15th, their six-point advantage over 18th-placed Leeds is comfortable enough to secure them another season in the English top-flight. Nonetheless, the pressure is on Hasenhüttl as the club's form remains nothing short of atrocious. Bar a surprise 1-0 victory at home to Arsenal, Southampton have failed to win any of their other 11 Premier League fixtures. In fact, calls for the German manager to be sacked have increased as of late. A win over Liverpool could calm those cries somewhat, but that will be a difficult feat to pull off.

Premier League - Who's out for Matchweek 37?