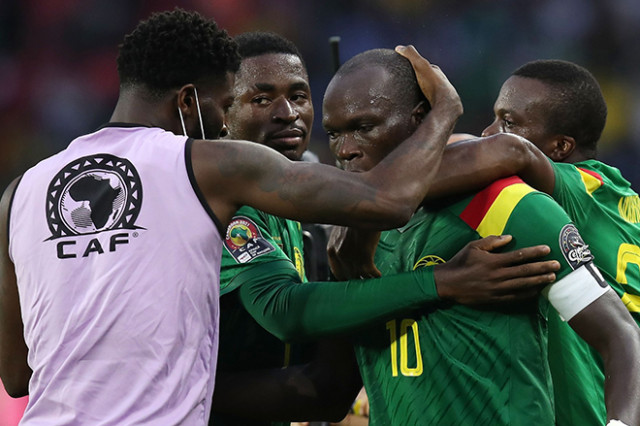 The captain of Cameroon, the host nation, Vincent Aboubakar has taken to social media to issue a heartfelt message to his fellow countrymen and women in the wake of a gut-wrenching tragedy at the 2021 Africa Cup of Nations.

Yesterday's showdown between the Indomitable Lions and Comoros in the round of 16 was meant to be a joyful moment for the match goers as the home side won 2-1 to book their spot in the quarterfinals. Unfortunately, this game was marred by a stampede that occurred at the stadium before kick-off.

Footage online, albeit unverified, shows fans climbing on fences while others were trampled. At least eight people have lost their lives to this tragedy, including a six-year-old girl. At least 38 others have been injured but there are fears the fatality from this stampede could rise.

Aboubakar, who scored in the 2-1 win over Comoros, posted a lengthy message on social media in response to this heartbreaking event as he extended his condolences to the victims. Speaking in the name of his national team, the skipper urged fans to be "disciplined and responsible"

"The Indomitable Lions and their entire staff deeply wail about the tragic incident that occurred at the Olembe stadium on Monday 24th January 2022, during the Cameroon vs Comoros match for the Round 16 of the African Nations' Cup.

"To the families of the victims, they extend their heart-felt condolences and wish a speedy recovery to the injured.

"The Indomitable Lions urge the football fans in Cameroon and Africa to be highly disciplined and responsible within and outside the stadiums so that football matches in general and the tournament remain festive moments.

"They also call for the preservation of security, brotherhood and shared happiness in the stadiums."

The CAF have announced that an investigation has been launched into Monday's incident. Additionally, Sunday's quarter-final, which was set to be held at the very same venue of yesterday's tragedy – the Olembe Stadium – will now be moved to the Ahmadou Ahidjo Stadium in Yaounde.