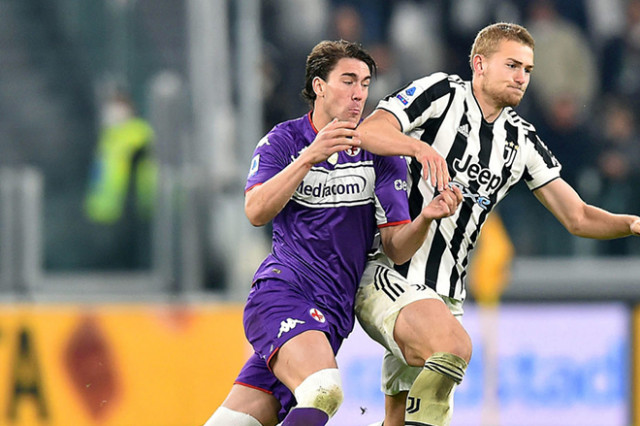 There's no denying that Dusan Vlahovic is the hottest striker in the transfer window not named Erling Haaland. The reasons are obvious: with 17 goals under his name this term and 21 from the 2020/21 Serie A season, the Serbian has emerged as one of football's deadliest young strikers.

Hence why Arsenal have been eager to bring the 21-year-old forward to the Emirates Stadium. With Pierre-Emerick Aubameyang falling out with Mikel Arteta and Alexandre Lacazette struggling to carry the goalscoring mantle in the final few months of his contract, a new no.9 has been prioritized by the north London giants.

For most of the window, the Gunners had a free run at Vlahovic, with most of the other interested teams preferring a summer move. However, one of Europe's biggest clubs have now reportedly entered the fray and they are none other than Juventus.

This is according to Goal, with the popular news outlet claiming that the Italian giants are readying a bid for the player this month. Fiorentina, his current employers, would like to retain his services until the end of the season as they are fighting to qualify for Europe. However, with his contract expiring in 18 months, now is the best time to cash in on him.

Vlahovic, for the most part, has been hesitant to move this month. This was the biggest roadblock for Arsenal as both the player and his agent refused to entertain the idea of switching clubs in January, with the goal instead being to complete the season at the Stadio Artemio Franch before assessing his options and making a decision about his future in the summer.

However, there have been claims that the striker has been holding out for a move to Turin, with the Serbian reportedly favoring a transfer to the Old Lady above all else. Goal claim that the Bianconeri have come to an agreement with I Viola over his price tag but must now check their finances and see whether the funds are available.

Will the player reverse his stance on a winter move and jump at the opportunity to play for Allegri's side? Interestingly, when speaking about the forward, Fiorentina director Daniele Prade confirmed what we have already known – there have been offers from England, namely Arsenal, which the Serbian has ignored – but he also revealed the club's willingness to do business with Juventus.

"Yes, we've received important bids for Vlahović in January - we're open to sell. But we've never received any answer from his agents," he told Sportitalia, as per Fabrizio Romano.

"Juventus? Our doors are open. We wait for Dusan to decide, we need an answer."

"Juventus? Our doors are open. We wait for Dusan to decide, we need an answer", he told sportitalia. pic.twitter.com/TcW8Lyg5xs

Additionally, reports emerged yesterday that Arsenal, after growing frustrated with Vlahovic, have turned their attention to Real Sociedad forward Alexander Isak. The Swedish ace has a release clause, albeit a hefty one, and has long been on their radar. Everton's Dominic Calvert-Lewin is another player admired at the Emirates Stadium, but whether the Gunners can land any of those two aforementioned names before the ongoing January transfer window slams shut remains unclear.