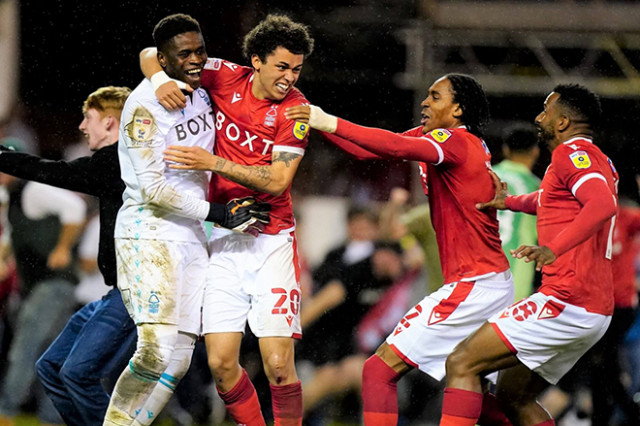 EFL Championship Playoffs final: How to watch Huddersfield vs Nottingham Forest live on May 29, 2022

Two teams have already secured their tickets to the Premier League next season, with Fulham and Bournemouth earning promotion out of the Championship and into the English top-flight. However, one slot remains up for grabs as Huddersfield and Nottingham Forest prepare to battle for that honor in the Championship Playoffs final.

Wembley will be the venue for this tie, dubbed the richest match in football, due to the huge money guaranteed by virtue of qualifying for the Premier League. Neither side enjoyed their path to the playoffs final, with Forest in particular sitting dead bottom in the table earlier on in the season.

The arrival of Steve Cooper changed everything for the Reds as he sparked a turnaround in form and fortunes for the Midlands outfit. In fact, since overseeing his first game in charge back in September 25, Nottingham Forest have picked up the most points and conceded the fewest goals, even managing victories over the likes of Arsenal and Leicester City in the FA Cup.

Unfortunately, despite their brilliant turnaround, Cooper's men narrowly missed out on automatic qualification due to a 1-0 loss to Bournemouth earlier this month. That result condemned them to a playoffs clash with Sheffield, which turned into an exciting fixture.

Nottingham Forest won the first leg away from home, beating the Blades 2-1 to set themselves up for a lovely second leg. At home, the Reds went 1-0 up in the first half, 3-1 on aggregate, and were comfortably on their way to Wembley until two second-half goals from Sheffield pulled the game back level.

From then on, Brice Samba turned up the heroics, making save after save, including in the penalty shootout, which the Midlands side won. They are now 90 minutes away from a return to the Premier League for the first time since 1998-99.

Huddersfield stand in their way and they too aren't a side to be taken lightly. The Terriers, who went 17 games unbeaten between December and March, are no strangers to playoffs, having won the last two they featured in, as they attempt to return to the top-flight, having made their last Premier League appearance in 2018-19.

Carlos Corberán's side finished higher than Nottingham Forest in the Championship, coming in at third after racking up two more points than their fourth-placed rivals. Additionally, they played fewer minutes in the playoffs semifinal as they did not need extra-time and penalties to book their ticket to Wembley.

Nonetheless, it was a tough fixture for Huddersfield. After drawing 1-1 with Luton Town in the first leg, Huddersfield needed a super-sub cameo from Jordan Rhodes, with the English striker scoring late in the second leg to secure a 1-0 victory, 2-1 on aggregate. All that's left is a highly-anticipated 90-minute affair against Forest.

Huddersfield: Danny Ward came off injured in the clash with Luton Town, but the Terriers are hopeful the striker can recover in time. Additionally, Sorba Thomas is expected back for this fixture but Matty Pearson, Alex Vallejo, and Ryan Schofield all remain sidelined.

Nottingham Forest: Keinan Davis should return to the lineup after working up his fitness. Unfortunately, Lewis Grabban and Max Lowe remain on the sidelines and are thus unavailable for Steve Cooper.