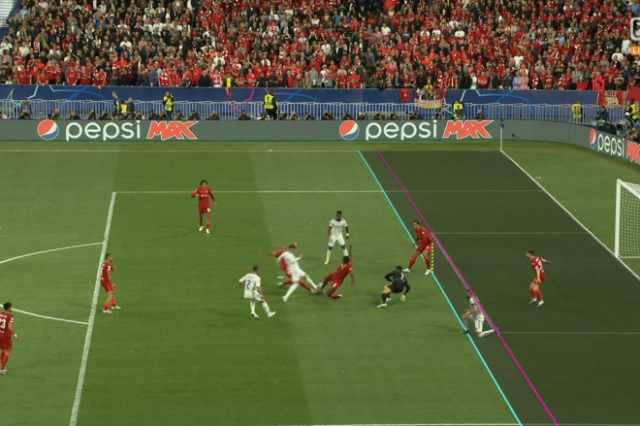 Real Madrid fans were left to question the efficiency of the Video Assistant Referee once more after being denied a potential opener in Saturday's Champions League final clash with Liverpool. Skipper Karim Benzema seemed to have broken the deadlock following a defensive mix up by the Reds but saw his goal being ruled out.

The French striker was picked out the Liverpool penalty area by Casemiro's long-overhead pass but was not able to properly bring it under control. Eventually he was able to attempt a shot but his tame effort hit Alisson Becker. However, the Brazilian goalkeeper made a mess of the save, subsequently poking the ball away from Konate who was in the position to clear the ball.

Madrid's Fede Valverde came into the mix, forcing Konate to make a second attempt to put the ball out of his side's penalty area. This time the French defender's ball hit Fabinho, who also redirected it back into the path of Karim Benzema to finish. The linesman's flag had already gone up at the time, stopping the Madrid striker in his tracks as he moved away to celebrate. The decision went to VAR and following a lengthy review, was deemed to be legitimate.

Here's a look at the Benzema goal that was ruled out for offside. #UCLFinal

It has since generated a lot of agitation on social media with many suggesting that the goal should have stood. According The Athletic, Referee Clement Turpin's and his team decided that it was offside because Benzema had been beyond Alisson, although there was still a Liverpool defender between him and the goal. As per the rule, there has to be two players between a forward and the goal for him to not be offside - either a goalkeeper and an outfield player or two outfield players. Ultimately, the goal was deemed as illegimate as it was Valverde that got the "crucial, intentional touch".

Former referee Peter Walton also offered an explanation for the decision, stating that the goal would have stood had Fabinho deliberately made an attempt to pass the ball back. "It is easy. Benzema is in an offside position. The offence is committed if the ball is deliberately played back to him," he said on BT Sports.