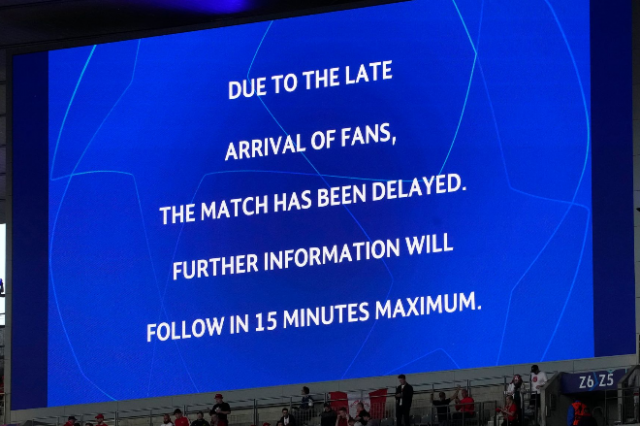 The 2022 Champions League final between Liverpool and Real Madrid has been postponed for more than 30 minutes due to security concerns outside the Stade de France. Fans were greeted with issues of getting into the stadium in Paris, with long queues at security checkpoints and congestion.

15 minutes prior to the original kick-off time, many fans had still not been able to access their seats. At the time, both clubs had long completed their pre-match routines and warm-ups. Cuban-American singer Camila Cabello who was due to perform live at the Opening Ceremony also had her appearance temporarily held up.

On the big screens inside the Stade de France, a message read: "Due to the late arrival of fans at the stadium, the match has been delayed. Further information will follow in 15 minutes maximum."

A repetition of UEFA's announcement that "the late arrival of fans" is to blame for the delay to kick off is thunderously booed. Supporters have been queuing for over two hours outside. There are countless witness accounts of how this evening has unfolded amid horrid organisation

The game was postponed for 15 more minutes as the final set of fans made their way to their seating areas.

Reports from those stuck outside the stadium - and footage feeding through as well - of poor organisation and communication, dangerously narrow routes with police vans further unnecessarily blocking space. All of it creating an uncomfortable, unwanted situation.