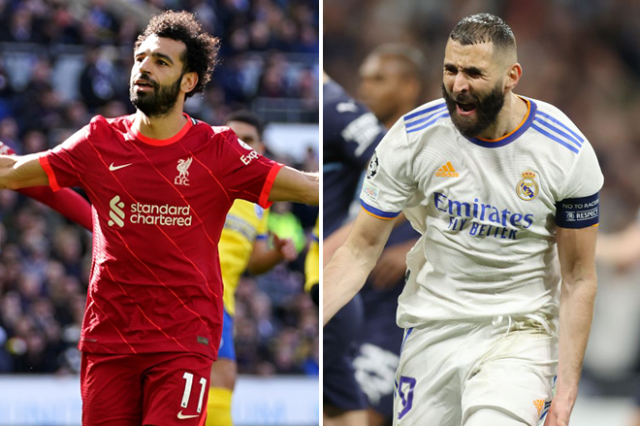 Stats: How Salah and Benzema compare this season ahead of UEFA Champions League final

Saturday is finally here, and this means one thing: the UEFA Champions League final is upon us!

Liverpool and Real Madrid are both in Paris, preparing for a highly-anticipated showdown at the Stade de France.  Klopp's side, who are set to contest their third European final since 2018, will look to win their seventh title while Los Blancos, the competition's most successful club in history, aim to cap off their La Liga success by being crowned the kings of Europe.

Two men in particular are taking center stage, both of whom are world-class attackers. To no one's surprise, they are Mohamed Salah and Karim Benzema, the top scorers at both the Reds and Los Blancos respectively.

The Egyptian ace will be eyeing revenge after enduring nightmare four years ago when these two clubs locked horns in the final. The Frenchman, on the other hand, has been Europe's star striker this season and will look to cap things off with a UEFA Champions League title and—possibly—a Ballon d'Or.

However, how do the two attackers compare this campaign? Here's a look at their stats ahead of today's showdown at the Stade de France.

Goals: Who has scored more this season?

One quick glance at the goalscoring numbers and it is easy to see why Benzema has been racking up rave reviews this season. With 44 goals in 45 appearances for Ancelotti's side, the Frenchman is nearly averaging a goal per game. Of the 44 goals, 27 came in La Liga, earning him the Pichichi, while 15 came in the UEFA Champions League, making him the top scorer.

Meanwhile, Salah's form in 2022 took a bit of a dip but the Egyptian still finished the campaign with a respectably 31-goal tally for Liverpool. He shared the Premier League Golden Boot with Heung-Min Son after scoring 23 times and has eight goals in Europe so far.

Assists: Who has been more creative this season?

Salah edges this one out, but only slightly, having registered 14 assists in the Premier League, the most by any player this season, and an additional two in Europe. Benzema, on the other hand, got 12 in La Liga, two in the UEFA Champions League, and an additional assist from the Supercopa de Espana when Real Madrid faced Barcelona in the semifinals.

"Last year, losing to Kane in the last game was pain for me!"

"I said next year I'm going to win both, golden boot and assists."

This is the mentality that sets @MoSalah apart

And who has won more trophies so far?

Unlike Salah, Benzema got his hands on the league title as Real Madrid beat Barcelona and Atletico Madrid to the Spanish Primera Division crown. Liverpool, on the other hand, missed out on the Premier League to Manchester City. However, Salah lifted England's two domestic cups, the Carabao Cup and FA Cup, while the Copa del Rey went to Real Betis.

However, Karim has won the Supercopa de Espana and the UEFA Nations League this season, taking his silverware tally in 2021/22 to three in comparison's to Mohamed's two.