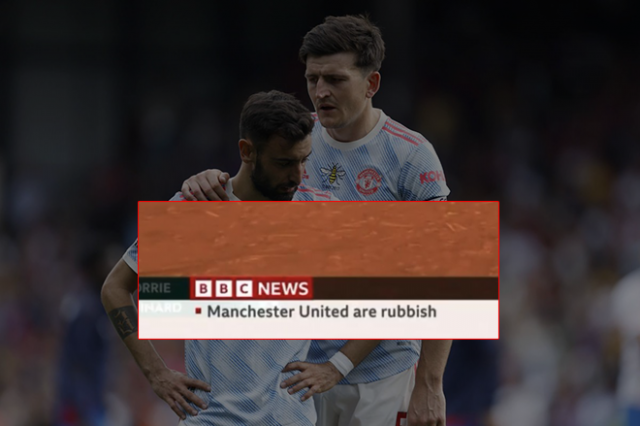 Manchester United have been the punch line of several jokes this season, and understandably so, after enduring an embarrassing 2021/22 campaign. However, no one expected BBC to add insult to injury by appearing to troll the Premier League giants.

The well-known British news broadcasters made the headlines after displaying a message mocking the 20-time English champions on live TV. This occurred early on Tuesday during a tennis update, with the channel displaying the caption "Manchester United are rubbish" on the news ticker at the bottom of the screen for all to see.

This quickly began picking up traction, with fans and journalists alike pointing to this unusual action. Did the national broadcaster intentionally mock the Red Devils after what has been their worst season in Premier League history?

The answer is no. Presenter Annita Mcveigh addressed the issue, explaining that it was an error that arose from a behind-the-scenes trainee learning how to operate the ticker by "writing random things", which were unfortunately and unintentionally published. Mcveigh also offered an apology to all Manchester United fans for any offense that was taken from this gaffe.

"A little earlier, some of you may have noticed something pretty unusual on the ticker that runs along the bottom of the screen with news making a comment about Manchester United, and I hope that Manchester United fans weren't offended by it," the presenter said, as officially quoted by the BBC.

Errrr… what is going on with the BBC News ticker? pic.twitter.com/fofbiGyMfs

Apology by BBC News after a trainee, learning how to put text on the ticker (the headlines that run along the bottom of the screen) accidentally published the words "Manchester United are rubbish" live on the broadcast...

"Let me just explain what was happening: behind the scenes, someone was training to learn how to use the ticker and to put text on the ticker, so they were just writing random things not in earnest and that comment appeared.

"So apologies if you saw that and you were offended and you're a fan of Manchester United.

"But certainly that was a mistake and it wasn't meant to appear on the screen. So that was what happened, we just thought we'd better explain that to you."

Further proof that this was an honest mistake, not an ill-intended public joke, was the following message aired on the ticker that simply read ""weather rain everywhere."

Nonetheless, this sparked a few more laughs at the expense of the Old Trafford side. Under Ralf Rangnick's interim reign, Manchester United finished sixth, missing out on UEFA Champions League football but ultimately securing a Europa League ticket after coming narrowly close to the worst case scenario: a UEFA Europa Conference League berth.

Nonetheless, Erik ten Hag has arrived in Manchester and has officially taken over as the new manager. The European giants are exploring reinforcements this summer, including defensive and attacking ones, as the Dutch tactician aims to rebuild the struggling iconic English club.