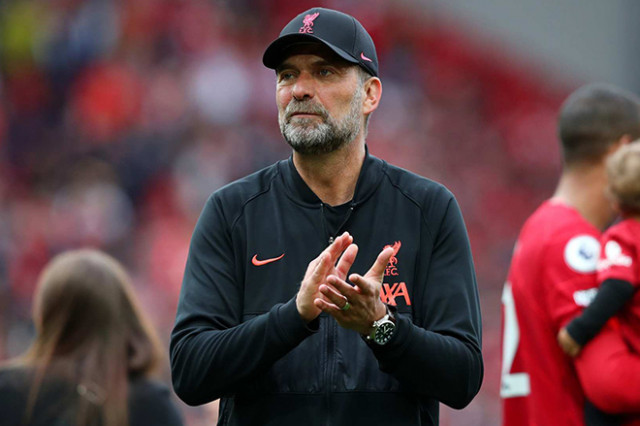 Watch: Klopp gives heartfelt interview after Liverpool miss out on EPL title on final day of the season

Jurgen Klopp gave an emotional interview in the aftermath of Liverpool's disappointing second-placed finish in the Premier League, with the Merseyside giants missing out on the title on the final day to bitter rivals Manchester City.

The Reds entered the final round needing a win against Wolves and a slip-up from the Cityzens in their showdown with Aston Villa if they were to be crowned the champions. Salah and Co. pulled off the first feat, beating Bruno Lage's men 3-1, but to their dismay, Guardiola's side did not drop points against Gerrard's team.

The Premier League champions were 2-0 down at home by the 75th minute, but two goals from Ilkay Gundogan and a lovely strike from Rodri led to a brilliant comeback as the Manchester giants went on to win 3-2 and successfully defend their crown.

Klopp, who was understandably devastated at seeing his brilliant side miss out on the coveted silverware, opened up about this heartbreak, telling Sky Sports "if you want to win big, you have to be ready to lose big" in a heartfelt interview. Check out the conversation in full in the clip below.

"If you want to win big, you have to be ready to lose big"

Klopp has led his team to two trophies so far, having won the Carabao Cup and FA Cup titles, meaning that Liverpool fans were able to celebrate silverware despite their Premier League heartbreak. Additionally, next week, the Reds will get the opportunity to win a third trophy this term when they face Real Madrid in the UEFA Champions League final.

The German boss will have to get his men motivated for Saturday's final as they go in search of a seventh title. It will be a tricky game for the English giants as Los Blancos; led by Benzema, Modric, and Vinicius Jr.; are a tricky side to beat. Nonetheless, the Reds have a brilliant opportunity to end 2021/22 on a high should they overcome the 13-time winners.