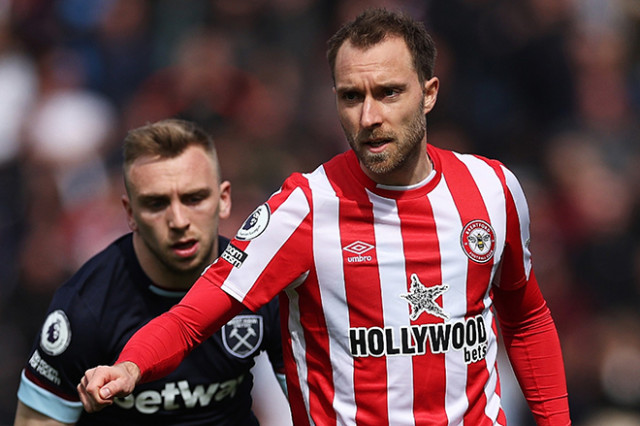 Manchester United's summer business looks to have picked up pace as the Premier League giants have reportedly agreed a deal for their second signing under Erik ten Hag.

That player is none other than Christian Eriksen, the veteran but talented playmaker who made his return to the English top-flight in January. According to the Athletic, the Danish star, who was subject to interest from Brentford and Tottenham as well, has verbally agreed to an Old Trafford move.

The 30-year-old has enjoyed a renascence in this calendar year. After suffering a nearly tragic cardiac arrest on the pitch during Euro 2020, the former Spurs sensation was released by Inter Milan after being fitted with an implantable cardioverter-defibrillator, as Serie A rules prevented him from playing.

However, earlier this year, he was handed a second chance by Brentford and joined the Bees, helping Thomas Frank's side in the second half of the season as they successfully avoided relegation to the Championship.

However, his contract was a mere six-month deal, thus opening up his future to speculation. Brentford were keen on retaining his services but Manchester United have won this race, with Eriksen informing Ten Hag's side that he wishes to join the Red Devils.

As reported by the reliable David Ornstein, the Red Devils are now drafting a contract for the playmaker, which will be a three-year deal. The midfielder will undergo a necessary – and crucial – medical before he can become Ten Hag's second major signing since joining the club.

Christian will follow in the footsteps of Tyrell Malacia, the 22-year-old left-back who arrived at Carrington today from Feyenoord for his medical. And to make things more interesting, Manchester United are just getting started, as they remain on the hunt for three more players.

Their pursuit of Ajax center-back Lisandro Martinez and Barcelona midfield talent Frenkie de Jong, both of whom have worked under Ten Hag, is well known. Additionally, the 20-time English champions are keen on recruiting a winger and are said to be targeting another Ajax star, this time Brazilian attacker Anthony.