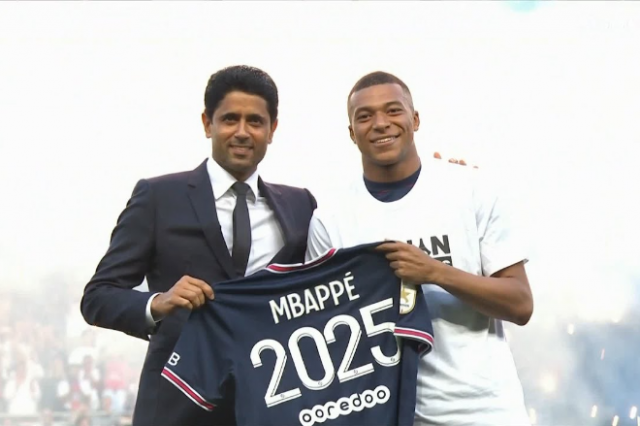 Kylian Mbappe has detailed the reasons behind his decision to snub Real Madrid in favour of staying at Paris Saint-Germain. The 23-year-old forward has revealed that his desired to help improve football in France crucial impacted the stance he took.

Mbappe broke the hearts of Real Madrid fans ahead of PSG's final game of the season after news emerged that he had decided to stay in the Ligue 1. The former Monaco sensation opted to extend his contract which was due to expire this summer by three more years, with the terms having been significantly improved by Les Parisiens. Understandably so, the player's U-turn has caused anger, frustration and disappointment in Madrid.

On Sunday, Mbappe took to Twitter to extend an olive branch to Real Madrid fans as well as the club's president Fiorentino Perez with whom he admitted to having developed a close relationship with.

"I would also like to sincerely thank Real Madrid and their president, Florentino Perez," he said in the open letter.

"I recognise the luck and the privilege of being wanted by such a great club. "I understand their disappointment. I will be cheering them on in the Champions League final, in Paris, my home.

"I am very happy to be able to continue to progress in France, the country that has seen me born, grow and fulfil myself. And which gives me the opportunity to continue to pursue my dreams."

On Monday, the Frenchman addressed the press for the first time since extending his contract at PSG and, once again, touched on the subject of deciding against moving to Real Madrid this summer.

"Leaving my country like that, there is this sentimental side," Mbappe admitted.

"The project has changed. The club has changed a lot of things sportingly and I think my story is not over.

"I want to thank [Real Madrid's supporters], they have always accepted me as one of their own. I understand their disappointment, but I hope they will understand that I am staying in my country. As a Frenchman, I want to help my country and grow the championship."