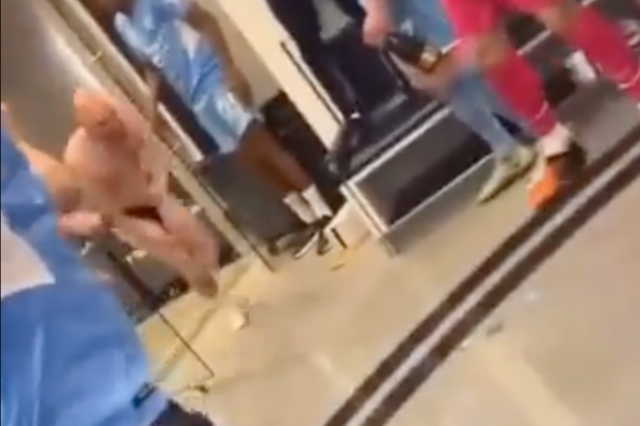 The odds of Man City losing the Premier League title after taking a 3-2 lead in the 81st minute of their clash with Aston Villa would have certainly been lower than one that might have suggested that an overly excited half-naked Pep Guardiola will be gliding across their dressing floor after retaining the title as champions for the second season running. Nevertheless, while the latter did not exactly happen, a new meme has made it into the internet's great repository while the Citizens continued their post-match festivities on Sunday afternoon.

An Illkay Gundogan brace and Rodri's second half strike were enough to secure Man City their fourth title in the Guardiola era. Earlier, the club had been dealt a massive score when Matty Cash and Philippe Coutinho fired Villa head to shift the balance of the title race in favour of Liverpool.

Following the blast of the whistle for full-time, an emotional Guardiola embraced his coaching staff while the fans of his team vacated their seats and stormed the pitch in massive proportions. Having received their winners medal and the trophy, the celebrations did not end on the pitch and was continued in the dressing room. A bald man whom many erroneously thought was Pep Guardiola, but was subsequently made out to be the kits man, broke the internet after sliding across the Man City dressing room with his bare chest while being cheered on by the players:

The dressing room moment you've all been waiting for… pic.twitter.com/CBiRghWruU

Before all the craziness among the players and staff, Guardiola made a profound statement by joking that he sought counsel from Real Madrid on how to complete a remontada. "We are legends, we will be remembered," Guardiola he said in his post-match interview.

"Wow. We're legends. When you win in this country, four in five, it's because these guys are so special, we'll be remembered. First time 100 points, second in Brighton, third without people. Wow, winning with our people is the best!

"This group of players are absolutely eternal in this club.

"What we achieved, it is so difficult to do it, Sir Alex Ferguson with Manchester United has done it years ago, two or three times, now I realise again the magnitude of doing this."

"I called Real Madrid and they gave me good advice!" Guardiola joked.

"No explanation in Madrid, no explanation today. It's momentum. "Sometimes it's nice to live these kinds of situations. I had the feeling this will help us to be stronger next season."