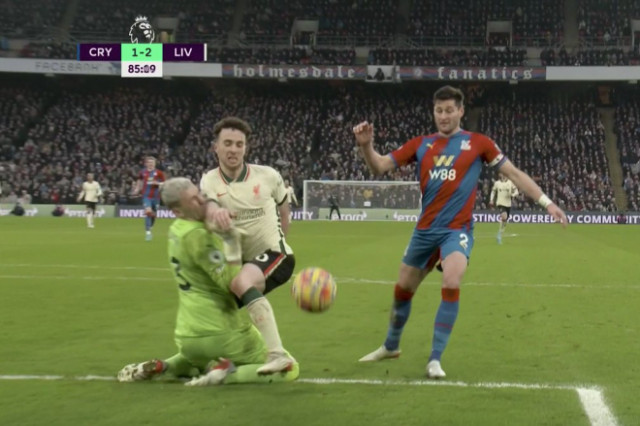 Premier League fans have taken to social media to bemoan the efficiency of the Video Assistant Referee technology once more for the role it played in Liverpool's win over Crystal Palace on Sunday. The Reds emerged as runaway victors in the afternoon's encounter, converting a spot-kick to seal a 3-1 win at the Selhurst Park.

It was a typical tale of two halves, with Liverpool dominating the first and Crystal Palace dictating the tempo in the second 45. It took the visitors just eight minutes to break the deadlock, with Virgil van Dijk meeting Andrew Robertson's corner-kick with a thumping header. Alex Oxlade-Chamberlain then ensured that Liverpool had a two-goal advantage before the half-time by controlling Robertson's cross and finishing past Vicente Guaita.

Having had numerous chances fall their way in the first half, Crystal Palace finally found the back of the net ten minutes into the second half. Odsonne Edouard was the man to get the goal after latching onto a through ball from Jean-Philippe Mateta. The Eagles kept on piling pressure and came close to managing an equalizer with Liverpool looking out of sorts. However, they were dealt a massive blow in their search for an equalizer after a controversial penalty decision went in favor of Diogo Jota.

The player, who had failed to control a pass in Palace's penalty area, ended up colliding with Guaita. Referee Kevin Friend initially overlooked the decision but had to rule otherwise after being prompted to check the pitchside monitor by his assistants in the VAR room. Watch the incident below:

Was it the right call? pic.twitter.com/Yp5yGEUQwc

The decision was met with backlash from the Crystal Palace bench and fans did not take the turn of events lightly as well. The call then gave Fabinho the opportunity to restore Liverpool's two-goal advantage, with the Reds now moving within nine points of league leaders Manchester City while having a game in hand.

Liverpool accept the gift. They have some shockers against them this season but that's never, ever a penalty.

Attacker running into the goalie, ball kicked out of reach by the attacker himself. But penalty to Liverpool pic.twitter.com/WbHljfNSxN

Have to agree as a Liverpool fan. Not in a million years that's a penalty. https://t.co/C1HzVA2xBp

Never a penalty. Wish the ref had the bottle to look at the monitor and stick with his original decision. If even Carragher says no pen for Liverpool you know it is not one!

That's a funny penalty! Jota was nowhere near the ball. Ah!