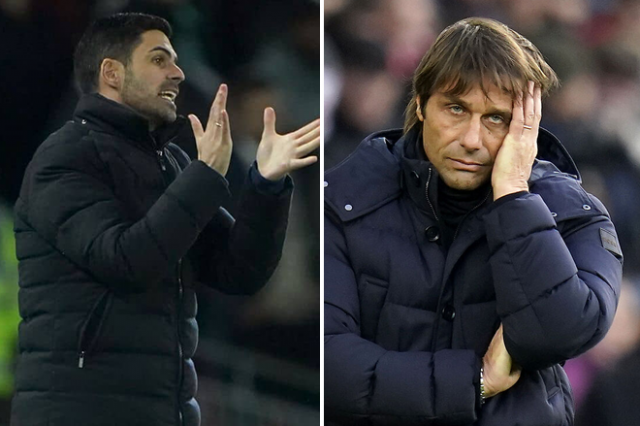 Arsenal's request to have the weekend north London derby postponed, which was eventually accepted, sparked anger from pundits, journalists, and several rival fans. However, Mikel Arteta, who has held his first press conference since that incident today, has come out swinging, hitting back at the negative reaction to that decision.

The Gunners submitted their request to the Premier League on Friday, asking for their trip to Spurs to be pushed back due to "having fewer than the required number of players available for the match (13 outfield players and one goalkeeper)", However, at the time of that request, only one of Arteta's several absentees was due to COVID-19 (Martin Odegaard), with the rest being unavailable due to injuries, the Africa Cup of Nations, and a suspension in the case of Granit Xhaka, who was sent off in the Carabao Cup semifinal vs Liverpool.

The decision from the English top-flight to grant Arsenal leeway was met with anger from Spurs, who were keen on facing a weakened Arsenal side on Sunday. Tottenham issued a public statement in which they criticized the postponement of this tie while Antonio Conte also let out his ire, saying he had never heard of something similar being accepted in a league throughout his coaching career.

Arteta, however, has described most of the criticism as lies, stressing that his side made this request for only the right reasons. Speaking in the pre-match conference for Thursday's 2nd leg Carabao Cup semifinal showdown with Jurgen Klopp's men, the Spaniard said (as per the Daily Mail):

"We will defend our club with teeth and nails. We're not going to get anybody damaging our name or trying to spread lies.

"We didn't have the players necessary to compete in a Premier League match. That is 100 per cent. We postponed the match for all the right reasons."

"I think more than hate there is a lot of respect for Arsenal and that comes from the history of the club, how it's always acted and how it's always conducted itself," the manager added.

"We know we did the right thing. We worked with the Premier League and the FA to make that decision. If anything we've been very honest at least.

Mikel even went a step further, admitting that his team are not yet out of the woods. However, recent reports claim that their clash with Liverpool will likely go through as a few players look to be back, namely Odegaard

"I don't want to give anything away. There are issues, that's why we couldn't play the last game,' he added.

"I hope that there is no new news tomorrow and the game can be played."

The Arsenal boss did not stop there. The former Man City no. 2 even threw in a sly dig at Tottenham, who issued a public statement in anger. Arteta stated that despite having had games called off on his club by opposition teams, the Gunners have never publicly questioned the matter.

"When a team has come to us and said we cannot play, we have never ever publically questioned any of that. That is why we have the Premier League and the FA."

Saka and Co. are set to host the Reds on Thursday needing a win in order to secure progression to the Carabao Cup final, where they would face Thomas Tuchel's Chelsea. After the midweek game, the north London giants will host Burnley over the weekend, with Arteta's men keen on returning to the top four, having currently dropped to fifth.