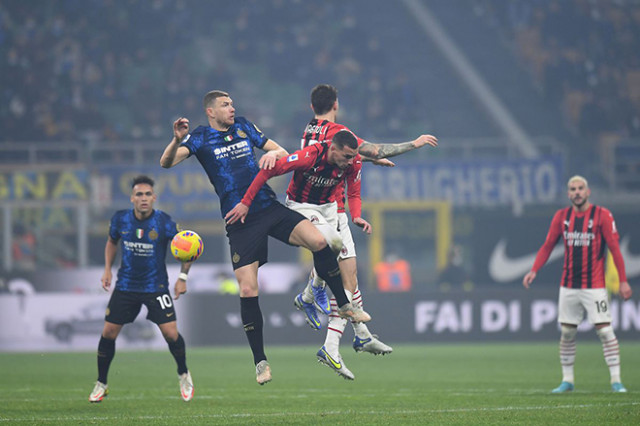 The end of the 2021/22 Serie A season is upon us. While Napoli sadly dropped out of the title race, AC Milan and Inter Milan are locked in an exciting battle for the coveted Italian top-flight crown that will go down to the wire.

Unfortunately, the Rossoneri and the Nerazzurri will not face off in the final round – that would have been an epic climax to the campaign! Instead, both sides gear up for tricky weekend showdowns as Inzaghi's men look to make it back-to-back league titles while Pioli's crew aim to end their 11-year wait for a Scudetto.

Here is everything you need to know ahead of the highly-anticipated conclusion to the 2021/22 Serie A season.

When will Inter Milan and AC Milan be in action?

Coincidentally, both teams will be in action at the same time as their games will kick off simultaneously at 12 p.m. ET (18:00 CEST). Sunday, May 22 is the date for the fixtures, with the Nerazzurri playing at the Stadio Giuseppe Meazza for their final game of the season while the Rossoneri will travel for their 2021/22 curtain closer.

Who will Inter Milan and AC Milan be playing?

While neither side will be facing a top six team, one club undoubtedly has it easier than the other in this decisive finale. Not only will Inter Milan boast the home advantage in their attempt to pip their bitter rivals to the title, but they'll also be facing Sampdoria, who are 15th in the table and only seven points clear of the danger zone. AC Milan, on the other hand, will have to visit Sassuolo, who are 10th with a respectable tally of 50 points.

How do Inter Milan and AC Milan compare in the table?

Here is a look at how the two Milan giants fare in the standings ahead of their fixtures against Sampdoria and Sassuolo this Sunday:

How did AC Milan get to this juncture?

With 83 points under the belt, it's no surprise why the Rossoneri are top of the table. No other team has won more games than AC Milan (25) this season, with Inter Milan coming in at a close second, while Pioli's men have suffered the joint-lowest defeats this term at four, tied with their city rivals.

One thing that should give the league leaders concern is what happened last time they locked horns with Sassuolo. That fixture took place at the San Siro, but despite boasting the home advantage, AC Milan fell to a disappointing 3-1 loss, with promising Italian striker Scamacca and Berardi getting on the scoresheet. A similar result could cost the Serie A giants the Scudetto.

How did Inter Milan get to this juncture?

Remember how AC Milan picked up 25 wins from the 37 Serie A games they have played so far? Well, Inter Milan boast 24 victories and have suffered only four defeats as well, hence why they are right behind the Rossoneri with 81 points. Additionally, with 81 goals scored, Inzaghi's men boast the best attack in the league thanks to the heroics from Edin Dzeko and Lautaro Martinez while Brozovic and Co. boast the second-best defense this season.

However, just like the Rossoneri, the Nerazzurri suffered a disappointing result when they last met their Sunday opponents. The defending champions visited Sampdoria back in September and twice threw away a one-goal lead to draw 2-2 at the Luigi Ferraris Stadium.

AC Milan are one step away from winning their first Scudetto since 2011! However, Pioli's men have little room for error due to a few factors. First of all, their lead at the top is only two points. While this means the Rossoneri simply need to win on Sunday in order to get their hands on the Serie A title, that gap can easily be overturned on the final day. Leão and Co. must match Inter's result and the trophy will be theirs.

Inter have the superior goal differential (+49 to Milan's +35), meaning a draw might not even be enough for Il Diavolo as they cannot risk going level on points with their neighbors. Nonetheless, their ate is in their own hands, which is the best position to be in.

The first and most crucial step is a slip-up from AC Milan. If the Rossoneri win their trip to Sassuolo, then there is nothing Inter can do. The Nerazzurri must triumph against Sampdoria and will need Pioli's side to drop points, be it a draw or defeat. Thanks to their superior goal differential, as mentioned above, Inzaghi's men will retain the league crown if they go level on points.

Which players are out for the 38th and final Matchday of the 2021/22 Serie A season?

AC Milan: The Rossoneri fortunately have a fully-fit squad.

Inter Milan: The Nerazzurri fortunately have a fully-fit squad.

Where can I watch AC Milan and Inter Milan in action this weekend?