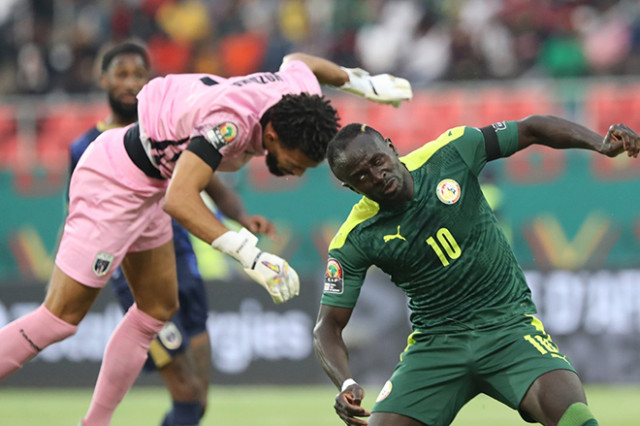 Concerned fans have gotten an update on Sadio Mane this morning after the Senegalese superstar was substituted off in yesterday's round of 16 clash with Cape Verde, due to a head injury, before immediately being taken to hospital.

The Lions of Teranga locked horns with the Blue Sharks for a spot in the quarterfinals. As has been the trend so far in the Africa Cup of Nations knockout stage, this fixture saw a red card – two, in fact! The first dismissal went to Patrick Andrade after VAR spotted him catching an opposition player above the ankle with his studs. The second sending off was for Cape Verde goalkeeper Vozinha.

The shot-stopper was guilty of taking out Mane who was running through on goal. Both men contested for a long pass over the top, but it was the Liverpool ace who got to the ball first before being wiped out by the opposition keeper, with the pair unfortunately clashing heads.

Despite being visibly dazed and concussed, the Premier League attacker was allowed to continue, and after a few minutes, he broke the deadlock, curving a lovely shot into the back of the net to make it 1-0. However, it became evident to the Senegalese medical staff that Mane was not fit to continue when he dropped to the floor shortly afterwards.

Sadio Mané goes down with suspected concussion after scoring for Senegal pic.twitter.com/OozPqQaFHv

The 28-year-old was subbed off and taken to hospital immediately, albeit as a precautionary measure. Vozinha, the man who collided with Mane, showed his class by visiting the Anfield man at the hospital and this is where the update came from. The pair posed for a picture, with Sadio being all smiles, hinting that he is recovering well.

After colliding on the pitch, Sadio Mane and Vozinha are reunited in hospital and in good spirit

Classy from goalkeeper Vozinha who went to check up on Mané after the game ended pic.twitter.com/bTH65VJwnV

However, his availability for the upcoming game is a totally different issue. Senegal went on to score another goal, thus winning the tie 2-0 and booking their spot in the last eight. It remains unclear whether the Lions of Tarenga no.10 will be available for that tie. The continental giants will return to the pitch on January 30, where they will face one of Mali or Equatorial Guinea, which means Mane should have ample time to rest and recover.