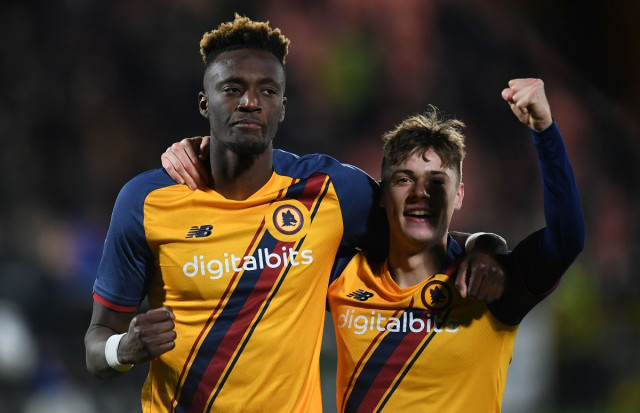 Tammy Abraham has given England boss Gareth Southgate a lot to think about in terms selecting a striker from the pool available to him ahead of the World Cup later this year. The 24-year-old striker propelled AS Roma to end their season on a high note by hitting a brace in Friday night's 3-0 win over Torino, smashing a longstanding record in Serie A in the process.

Abrahama scored his 16th and 17th league goals for Jose Mourinho's team in the season's last league game as they prepare for their Europa Conference League final clash with Feyenoord. The former Chelsea man got his first in the 33rd minute after receiving a pass in the Torino penalty area from his skipper Lorenzo Pellegrini.

Three minutes before half-time, the attacker got his second of the night via a spot-kick. In the 78th minute, Englishman passed on the chance to go home with the matchball by allowing Lorenzo Pellegrini to take Roma's second penalty of the night, ending the season with 17 goals anf five assists.

The ex-Chelsea academy star ended the night by breaking a record in the process, becoming the highest scoring English player in a single Serie A campaign. This ended Gerry Hitchens' reign as the former England international had been sitting atop the list with the 16 goals he scored for Inter Milan in the 1961-1962 season.

Speaking after the night's win, Abraham said: "It's been a good year for me.

"I hope to build on this year and hopefully we can finish with a trophy and it can be the perfect year."

The striker joined Roma in the summer of 2021 for only £34M from Chelsea and has since been indispensable as he ranks as the club's top-goalscorer across all competitions, scoring 29 goals and providing five assists in 56 appearances. With the player enjoying the form of his life, fans have called for his inclusion in Gareth Southgate's Three Lions squad for the Qatar 2022 World Cup, although the latter often gives preference to home-based players.