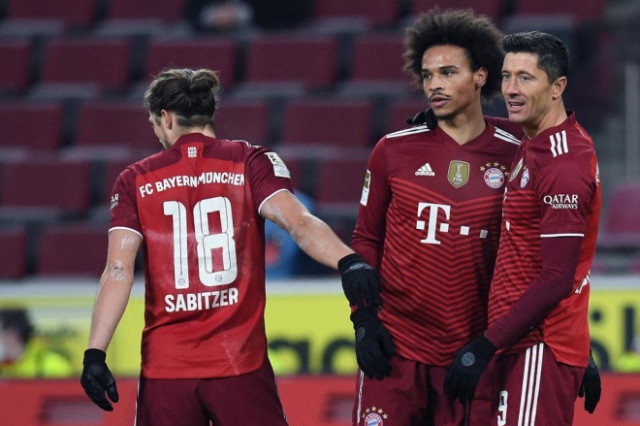 Given their dominance in the Bundesliga, it's not surprising that Bayern Munich have started to open up a gap at the top of the table. However, die Roten are not in the clear yet, as Dortmund are six points behind and there are plenty of games to go between now and May. At the opposite end of the spectrum, a desperate battle to avoid the drop is now starting to take shape, meaning that some of this round's results could see some major shake-ups in the league table.

Here's all you need to know ahead of matchday 20.

Bundesliga standings ahead of matchday 20

Here's how the table looks ahead of the next round of games:

Bundesliga games you won't want to miss on matchday 20

Bayer Leverkusen vs Augsburg: As things stand, Bayer Leverkusen find themselves in third spot, with just one win from their last five games. Things have gotten quite tricky for Gerardo Seoane's side, who are missing quite a few players due to injury, illness, and the AFCON tournament. That's something that struggling Augsburg, who are just one point away from the drop zone, will look to exploit when they travel to the BayArena on Saturday afternoon.

Leverkusen will also be well aware of both Hoffenheim and Union Berlin, who are lurking just behind and waiting for any slip-ups to try to move up the table. With Dortmund and Bayern looking set to finish in second and first respectively, the battle for the last two Champions League spots could turn out to be one to track closely as there are currently a large crop of teams, including Leverkusen, Hoffenheim, Union Berlin, Freiburg, RB Leipzig, Eintracht Frankfurt, Cologne, and possibly Mainz who are all looking to potentially secure Champions League football at the end of this campaign.

Hoffenheim vs Borussia Dortmund: Hoffenheim suffered a setback midweek as they were beaten 4-1 by Frieburg in the DFB-Pokal. It marks a second straight loss across all comps for Sebastian Hoeneß's men, who also lost 2-1 last weekend to Union Berlin. Two back to back negative results have certainly raised concerns in Hoffenheim's camp, especially as they had gone seven matches unbeaten prior to last weekend's reversal. The hosts will be hoping that the in-form Andrej Kramaic, who's seeking his 100th goal for the club, will be able to help be the deciding factor as they take on Dortmund, who sit in second spot.

Meanwhile, Dortmund will know this could present a tough task as Hoffenheim have lost just once at home all season. Die Schwarzgelben also come into this match having suffered a shock loss in the DFB-Pokal. After kicking off 2022 in fine mettle, with two wins in the Bundesliga, Marco Rose's troops were beaten 2-1 by Bundesliga.2 side St. Pauli, thus ending their DFB-Pokal run in the round of 16. One player eager to get off the mark is none other than Erling Haaland, who's scored 22 times in 18 appearances across all comps, but has struggled to find the back of the net on the road - he's scored just three times in away Bundesliga matches.

Borussia Moenchengladbach vs Union Berlin: The hosts may be given a huge boost if both Matthias Ginter and Denis Zakaria recover in time for their upcoming clash, and given how impressive Union Berlin have been this season, they'll need all the help they can get. Gladbach kicked off 2022 in fine form by picking up a hard-fought 2-1 win over league leaders Bayern Munich, but then lost to Bayer Leverkusen in the Rhine Derby and now come into this clash having lost midweek in the DFB-Pokal to Hannover.

As for Union Berlin, they enjoyed success in the DFB-Pokal as they defeated cross-town rivals Hertha in a five goal thriller. Urs Fischer's side currently sit in fifth spot, but they haven't ruled out a push for a top four spot, and their argument has really been bolstered by a crucial 2-1 win over Hoffenheim last time out. They're just outside the top four based on goal difference, and actually are just a point behind Leverkusen, so

Hertha Berlin vs Bayern Munich: The reigning champs come into this contest having cruised to a 4-0 win over Cologne, with Robert Lewandowski netting a hat-trick, and in doing so, reaching a huge milestone. Lewandowski is now the second player in history to score 300 or more goals, the other being the late Bayern icon Gerd Muller. And with Bayern out of the DFB-Pokal, they'll arrive in Berlin a lot well-rested and prepared for the task ahead.

That doesn't bode well for Hertha Berlin, who are facing an uphill battle against history. To date, they've won just two of their last 24 Bundesliga meetings with Bayern, while losing 18 times. And it's not surprising that Lewandowski has a strong track record of netting against this weekend's hosts, with 15 goals in his last 20 appearances, and ten of those have come in his most recent five matches. Still, they'll have to do their very best to shake off a heart-breaking loss to city rivals Union Berlin in their midweek DFB-Pokal tie and try to hold a rampant Bayern at bay this weekend.

Here's who's out and and in doubt ahead of matchday 20