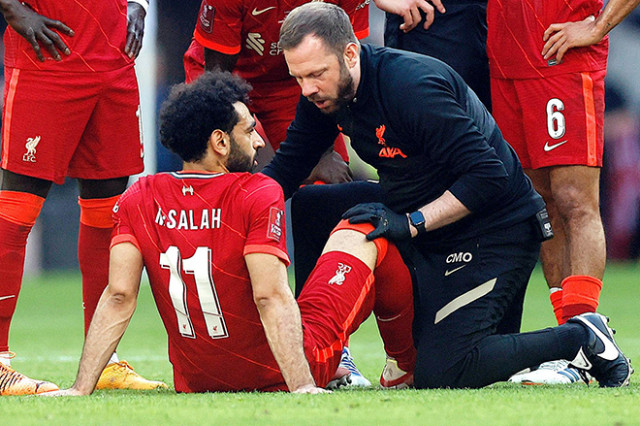 Liverpool are gearing up for a crucial Premier League showdown on Tuesday, with the Merseyside giants set to take on Southampton in the penultimate game of the 2021/22 English top-flight season.

A lot is at stake in the midweek trip to St. Mary's Stadium as Klopp's men can either move within a single point of league leaders Manchester City ahead of the final round or officially lose the title to the Cityzens. City's 2-2 draw away to West Ham leaves De Bruyne and Co. with a four point advantage, meaning should Liverpool lose to the Saints, then Guardiola's side will be crowned the champions for a second straight year.

Victory would see them move within a point of the table toppers while a draw would leave things extremely difficult, but not impossible, for the quadruple chasers. As a result, fans have been fretting over the fitness of two key players who picked up injuries in the FA Cup final victory over Chelsea.

They are none other than Mohamed Salah and Virgil van Dijk, arguably two of the best players at Anfield and in world football. Both men were forced off the pitch after picking up knocks, with the Egyptian winger limping off in the first half after hurting his groin while the Dutch center-back lasted 90 minutes before coming off in the 91st after feeling a "little twinge" in his knee.

The Reds went on to win that game on penalties after drawing 0-0 after both normal and extra time. Once the celebrations came to an end, the focus shifted back to those two players and whether they will be available for the midweek trip to Southampton and the upcoming UEFA Champions League final.

While no official confirmation has been announced, Anfield Watch report that both men have avoided serious injuries. According to that news outlet, Liverpool are optimistic regarding their situation and even felt that it was unnecessary to send their star men for scans. Should Salah and Van Dijk continue to feel pain on Monday, the day before the Southampton visit, then further investigation will be needed, but as of now, the Premier League giants' medical staff do not foresee that occurring.

Whether Jurgen will risk his two world-class players on Tuesday, however, is another question. With the UEFA Champions League final showdown versus Real Madrid being less than two weeks away, the German boss might understandably err on the side of caution.

Fortunately for Liverpool, they are not short on talented players to fill that void. Joel Matip, who started on the bench in the FA Cup final, came on for Van Dijk while Diogo Jota, who is the fifth top scorer in the Premier League this season with 15 goals, replaced Salah and can reliably deputize in his absence.