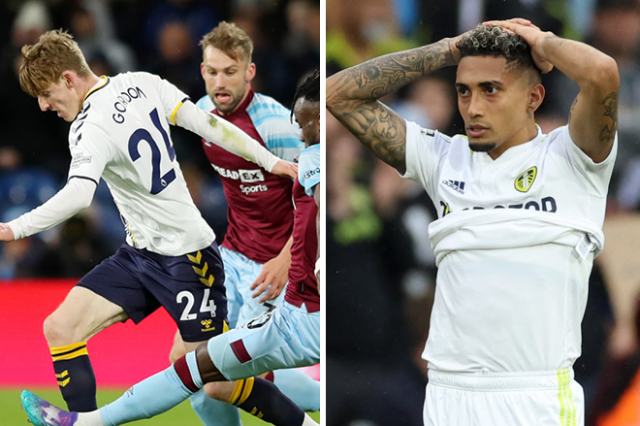 2021/22 has been one of the most exciting seasons in recent Premier League history. Not only will the title and top four races be determined on the final day, but also the relegation battle as one team is yet to suffer the drop.

Additionally, things are made more interesting by the fact that Burnley and Everton, two of the sides fighting to remain in the English top-flight, will take to the field on Thursday, with these results set to have huge ramifications on Sunday's final round.

Which team is mostly likely to get relegated and which side are odds-on favorite to survive? Here are all the permutations for this nail-biting battle.

Which teams have already been relegated from the Premier League this season?

As of now, two teams have officially been relegated. They are Norwich City and Watford, who are 20th and 19th in the table respectively. However, the Canaries can swap places with the Hornets if Dean Smith's side beat Tottenham on Matchweek 38 and Watford slip up against Chelsea.

Which teams are in danger of getting relegated from the Premier League this season?

While 15th-placed Southampton (40 points) can mathematically finish in the 17th spot, the Saints cannot go down. As a result, the relegation fight is a three-way battle between Burnley (34 points), Leeds (15 points), and Everton (36 points).

At the time of writing this article, the Clarets sit 18th, thus occupying the third and final relegation spot. However, Burnley have two games left to play this season, as do the Toffees. This means that it is Jesse Marsch's Leeds side – having played a game extra in comparison to their two rivals – whose fate is out of their hands as they will need a bit of fortune elsewhere in order to survive.

What are the remaining Premier League fixtures for the relegation battlers?

What are the permutations for the 2021/22 Premier League relegation battle?

One win from their games against Crystal Palace and Arsenal would do the job as a single victory would put them out of reach from Leeds. In fact, even two points from their final two games (two draws) could suffice due to their superior goal difference over the Whites, meaning that even if Raphinha and Co. triumph on the final day and move level on points with Lampard's side, the Merseyside outfit will likely have the advantage.

If Burnley lose their two remaining fixtures, then Leeds are guaranteed another season in the Premier League regardless of their result vs Brentford on the final day. If Burnley beat Aston Villa on Thursday, then Marsch's side will need a victory over Brentford and a defeat from the Clarets on the final day in order to dodge relegation. If Ben Mee and Co. draw with Aston Villa, then Leeds will need to better the Clarets' result on the final day as their horrible goal difference will likely result in them going down if they finish the season level on points with the Lancashire club.

Victories over Aston Villa and Newcastle would secure them safety regardless of what happens elsewhere. A draw on Thursday would mean that the Clarets would simply need to match Leeds' result on the final day as their superior goal difference should give them the edge. If the 18th-placed side lose to Gerrard's men during the midweek, then Ben Mee and Co. will need to better the result of Marsch's side in order to survive (a draw if Leeds lose and a win if Leeds draw).

Here are the broadcast listings for the remaining Premier League fixtures involving Everton, Burnley, and Leeds